Parents want to reduce their car use, so let’s invest in transit, walking and cycling infrastructure

There’s a popular belief that parents chauffeur their young children everywhere. And certainly parents have many reasons for preferring cars over other modes of transportation: Children get easily tired. Parents need to pack things like food, diapers, etc. Parents want to keep their children comfortable and safe. Parents have busy and complicated schedules and taking the car can be quick and convenient. 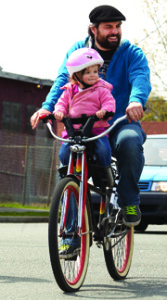 However, research I published today provided some surprising findings. In 2011-2012, Sylvia Parusel and I conducted interviews with 52 parents of young children (12 or younger) in four diverse areas of Vancouver — Downtown, Dunbar-Southlands, Sunset and Grandview-Woodland. We wanted to know how parents use the car in their daily lives. We hear quite a bit about young adults shifting away from car use towards transit, car-sharing, biking, and walking. But we don’t know much about what’s happening with people who have children.

What surprised us with this research is that despite the many challenges of moving about with young children, many parents were trying to reduce their car use and many did not own a car at all. Besides using a car, many parents regularly walked, cycled or took public transit with their kids. A few had chosen to live without a car and many could not afford to own a car. The parents who relied primarily on the car were not the majority, and in many cases did so simply because they lacked viable alternatives.

The parents we spoke with were generally aware that over-reliance on cars contributes to problems like climate change, traffic congestion and poorer health. For example, a mother who relied primarily on the car said that she didn’t like the environmental impact of using a car. She didn’t like the fact that the kids aren’t getting places “under their own speed. It’s not as healthy a way of living.”

Many parents really preferred the experience of walking, biking or taking transit with their children. Driving was often too stressful with children in the car, especially when stuck in traffic with tired, hungry or bored kids. Parents found their children were happier, healthier and safer outside of the car. They often felt more connected to their neighbourhoods if they walked or biked locally with their kids. As one mother said, when you’re walking with your child to school, you get to know your community – “your feet are attached to it.”

However, parents did experience challenges with non-car travel. As much as they wanted to use alternative transportation car and put a lot of effort into trying to do so, they sometimes gave up. For example, public transit was frustrating when boarding a crowded bus with a stroller or having to transfer buses with poor connections.

Another finding is that parents’ transportation options varied depending on where they lived and how much money they had. Many parents preferred Skytrain. It’s more reliable, faster and easier with a stroller, and more fun for children, compared with the bus and car. But it is only available in a few parts of the city. Traffic is more dangerous in some areas of the city than in others, which often forced parents to be very cautious with their children walking or biking.

For low-income parents, the cost of transit fares could prevent them from reaching important destinations such as a doctor’s appointment. For parents who own a car, the high fares are a disincentive to switch to transit.

Despite all these problems, many parents were trying to reduce their car use and many did not own a car. Given parents’ interest in finding alternatives to driving, we believe that policy makers would be wise to build upon this interest and make strategic investments to improve options for public transit, cycling and walking.

These strategic investments, we argue, need to include complete communities and equitable and family-friendly transportation. Communities need to be built with housing and daily amenities (including transit) close enough to be reached by walking or cycling; public transit needs to be more available and affordable; and streets need to be safer for children to walk and bike throughout the city.

To sum up, this study, based on parents’ everyday lives in Vancouver, suggests that we need lots of good alternatives to the car. A yes vote in the current plebiscite would be a huge boost to getting more accessible and reliable transit – and we also need to continue to work for more affordability of transit and safer streets for children.

This research is the basis of a CCPA paper, Moving Beyond the Car: Families and Transportation in Vancouver, BC.

Arlene McLaren is Professor Emerita in the Department of Sociology and Anthropology at Simon Fraser University. She is co-editor (with Jim Conley) of Car Troubles: Critical Studies of Automobility and Auto-Mobility (Ashgate) and co-author (with Sylvia Parusel) of several articles on automobility and its impact on families published in Canadian Review of Sociology, Canadian Journal of Sociology, World Transport Policy and Practice, Mobilities and Gender, Place & Culture.