Off the Highway by Mette Bach: politics and memoir

Another suggestion for summer reading: brand new from local publisher New Star Books: Off the Highway by Mette Bach, a short (about 80 pages) memoir of her childhood and adolescence in North Delta. Bach weaves together personal recollections, history and social commentary to create a quirky, funny, depressing picture of a little-known Vancouver suburb. 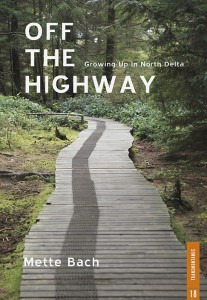 Regular readers of Policy Note are probably familiar with some of the political and environmental issues plaguing North Delta, like the South Fraser Perimeter Road and the degradation of Burns Bog. But otherwise, most of us don’t know much about North Delta, which, like many (most?) suburbs, seems to have little to recommend it. Or, as the teenaged Bach and her friends would say,

North Delta is the kind of place that has a lot of potential for those who belong. For people who liked having yards and cars and patio furniture and plastic basketball hoops in their driveways and affordable mortgages and access to amenities, it was a perfectly legitimate community. For us, it was hell.

Bach shares stories of her Danish immigrant family struggling to assimilate into North Delta culture — her mother tries to find happiness and fulfillment in her new life as a housewife with a two-door garage and a wrap-around yard; Bach and her father escape invitations to play weird team sports like softball with the neighbourhood kids by going fishing on Deas Island. She tells us about her friend Elaine’s family, who ran Henry’s Canadian and Chinese Restaurant for decades until the land was bought up by developers and the restaurant demolished. We also learn more about the history of North Delta, which, it turns out, is fascinating — farming, canneries, black bears in the street — and who knew that at one point Disney was planning to buy and develop Burns Bog?

There are lots more juicy tidbits like this in Bach’s book, framed by her compelling argument that as time goes on and development continues, more and more specificity is erased from North Delta and suburbs like it. Behind the blandness that drove Bach and her teenage friends crazy, North Delta has a unique history and flavour, which, like Burns Bog, is threatened by new roads and environmental destruction.

Sarah Leavitt is a writer and cartoonist, and former Media and Publications Specialist at the CCPA-BC. Follow Sarah on Twitter