All photos © Garth Lenz unless otherwise noted.
By Garth Lenz and CCPA

New research from veteran earth scientist David Hughes concludes that the Trans Mountain Pipeline expansion project (TMX) makes no financial sense. In fact, Alberta heavy oil producers can expect to lose money on every barrel of oil they produce and move through TMX.

Contrary to claims that bringing heavy oil to tidewater for export to Asia will fetch a higher price than in US markets, Hughes’ report for the Corporate Mapping Project shows that when TMX is completed, Alberta heavy oil producers could lose $4 to $6 on every barrel of oil they sell. Higher transportation costs, lower market prices and a lack of oil refining capacity in Asian markets where TMX’s unrefined heavy oil might sell are key reasons why the project is a money-loser.

The TMX project essentially involves running a new pipeline parallel to the old one, tripling the volume of heavy oil that could be moved from Alberta to Burnaby and the Port of Vancouver. And parallel to the project’s sad financial prospects is another equally disturbing tale: that of the profound ecological and cultural threats posed by TMX.

To shed light on that story, the Corporate Mapping Project asked Garth Lenz—an award-winning photographer who has spent decades documenting the ecological and climatic impacts of the fossil fuel industry—to explore the rich and varied landscapes that would be threatened by pipeline construction.

Several flights over those lands left Lenz humbled at what he saw.

The swath of land that this pipeline would pass through is uniquely beautiful, dramatic and rare and not something to be taken for granted or put at risk for such dubious gains as have been claimed by the fossil fuel industry and Canadian and Alberta governments.—Garth Lenz

Far from the Trans Mountain Pipeline’s entry into British Columbia lie the Alberta oil sands: the planet’s largest energy project, Canada’s single largest and fastest growing source of greenhouse gas emissions, and the greatest concentration of capital the world has ever seen.

Yellowhead Lake and Yellowhead Mountain. Lying on the BC Alberta border and the Continental Divide and the point where the pipeline would enter BC, this area is the source of the Fraser River. This photograph is taken almost on top of the proposed pipeline route.

Rearguard Falls Provincial Park, located along the Yellowhead Highway just south of Mount Robson Provincial Park, is the farthest upstream that salmon can travel during their spawning migration up the Fraser River system and lies very close to the pipeline route.

Just outside of the community of Blue River, the proposed pipeline route runs along the edge of Blue River Black Spruce Provincial Park. It is one of 22 parks and protected areas that the pipeline would cross.

North Thompson River just north of the community of Blue River. The proposed  pipeline would run along the western shore of the Thompson River for a long stretch here.

Near the community of Barriere. An intense wildfire here in 2003 caused massive damage and evacuations in the communities of Barriere, McClure, Louis Creek, and surrounding areas. Intensifying wildfires are a reminder of the devastating climatic consequences of fossil fuel use. The pipeline would run just a few  kilometres west of this corridor.

A scene of the massive 2003 wildfire between Louis Creek and Barriere and just a few kilometers from the pipeline route.

Lac du Bois Grasslands Provincial Protected area, Kamloops, and the North Thompson River. The pipeline would cut through the eastern section of this large protected area.

The south shore of the Thompson River in Kamloops, BC just upstream of where the pipeline would cross directly under the river.

Jacko Lake, south of Kamloops, is a lake of great cultural significance to the Secwepemc people. The pipeline would travel along its western shore.

Inks Lake. Located within about a kilometre of the pipeline route, this lake lies within the traditional territory of the Secwepemc Nation and is just west of Jacko Lake.

Coldwater River just upstream from the Coldwater reserve. The Coldwater First Nation have successfully fought to prevent the pipeline from running through their aquifer and endangering their water supplies.

Coquihalla Canyon Provincial Park. This popular park is located just outside the community of Hope. The pipeline would run within about a kilometre of its northern border. Its dramatic canyon with its 300 foot sheer granite walls along the Coquihalla River required the creation of a series of tunnels in 1914 as part of the Kettle Valley Railway.

The Coquihalla River in Coquihalla Canyon Provincial Park and a tributary of the Fraser. The existing pipeline crosses the Coquihalla 13 times in less than 20 kilometres. The proposed alternative route for the pipeline avoids those crossings but would be vulnerable to avalanches in this very rugged terrain.

The pipeline’s Sumas Tank Farm with residential area, Fraser Valley agricultural land, and Mount Baker in the background. A study commissioned by the cities of Abbotsford, Surrey, Coquitlam and Burnaby, and the township of Langley, found that an expanded pipeline would cost the five municipalities more than $93 million over 50 years.

The Salmon River in Fort Langley near the point where this salmon producing tributary of the Fraser River is crossed by the pipeline. There have been multiple spills on the existing pipeline in Abbotsford in the last 11 years.

The tank farm in Burnaby at the pipeline terminus would double from 13 to 26 tanks. Professional engineers as well as the deputy Fire Chief of the City of Burnaby have concluded that the expansion would result in the greatly increased likelihood of an inextinguishable tank fire that would threaten human health and property.

An oil tanker fills up at the pipeline’s terminal in eastern Burrard Inlet in Burnaby—Tsleil-Waututh territory. The pipeline expansion would result in a seven-fold increase in tanker traffic in these already busy waters, including tankers carrying up to 120,000 tons of toxic diluted bitumen. That’s 3,000 times more potential pollutant than the spill by the cargo ship Marathassa in English Bay that fouled local beaches in 2015.

Haro Strait and the Salish Sea near the Swartz Bay ferry terminal—busy waters that oil tankers would transect with the pipeline’s oil. Tankers five times heavier than cargo ships like this would travel 148 kilometres through these narrow waterways before reaching the open ocean. Clearly any kind of an oil spill in these waters would have devastating effects on a range of species but the iconic—and threatened—southern resident orca pod is most at risk. 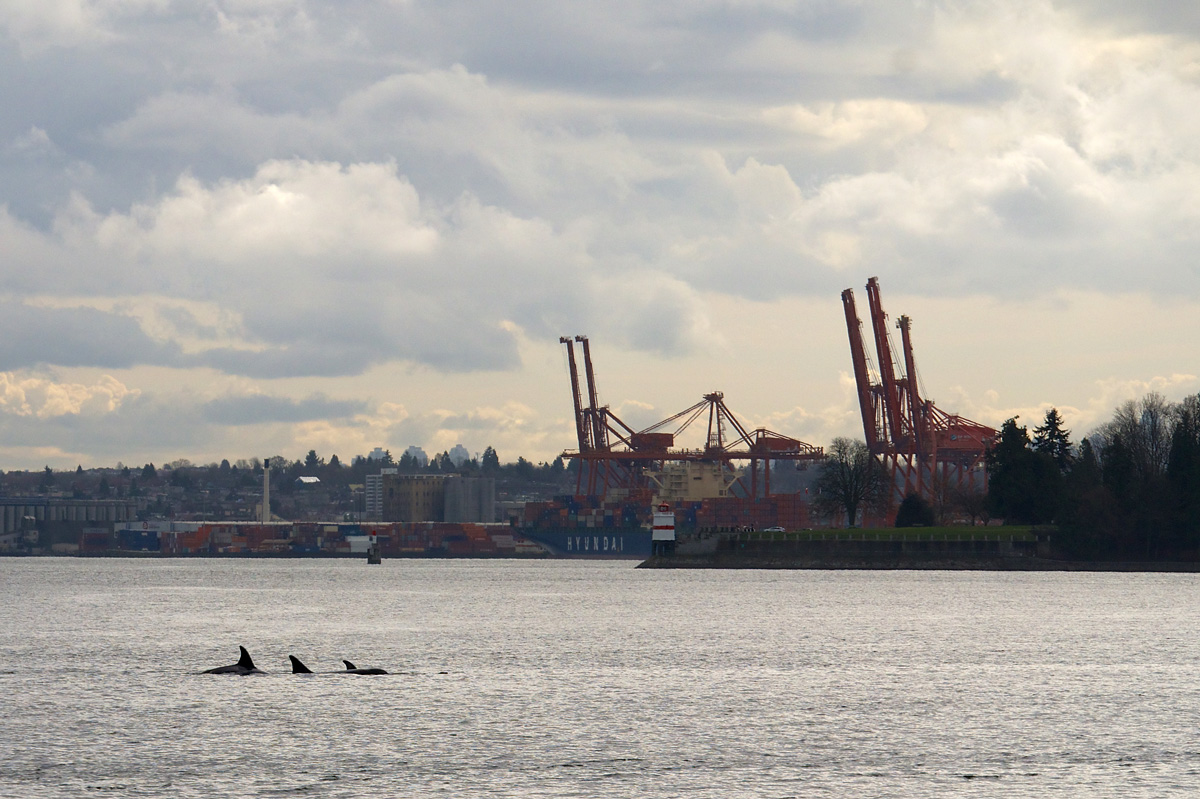 With recent reports showing climate change to be far worse than previously anticipated, and with major foreign players like Royal Dutch Shell, Marathon, Statoil and Conoco Phillips voting with their feet and running for the (oil sands) exits, is this really the time that we should be spending huge amounts of taxpayers’ money to buy and build pipelines that the industry sees as uneconomical?