Mobility pricing in practice: A look at London, Stockholm and Singapore

An independent commission on mobility pricing (also called “road pricing” or “congestion charging”) will report to TransLink and the Mayors’ Council shortly. In a recent CCPA paper, I looked at the types of mobility pricing that could be considered for Metro Vancouver and the challenge of ensuring a new system is fair.

Declining technology costs, and widely cited case studies of London, Stockholm and Singapore, have prompted interest from cities around the world to change the way drivers are charged in order to contain congestion, reduce pollution and raise revenues in support of the transportation system. Below I summarize the experiences in London, Stockholm and Singapore, each of which have implemented a congestion-charging zone to access their central cities.

London’s congestion charge regime started in 2003, with a £5 per-day fee for vehicles driving into the central city on weekdays between 7 am and 6 pm. The fee increased over time to the current £11.50 (approx $17), which applies to any driving in the area, not just vehicles crossing into the zone. Many vehicles (taxis, buses, commercial vehicles) do not pay the charge at all while local residents receive a 90% discount, meaning only about 30% of vehicles actually pay the charge. The western boundary of the charging zone was extended in 2006, but rolled back after the election of a new mayor in 2008. 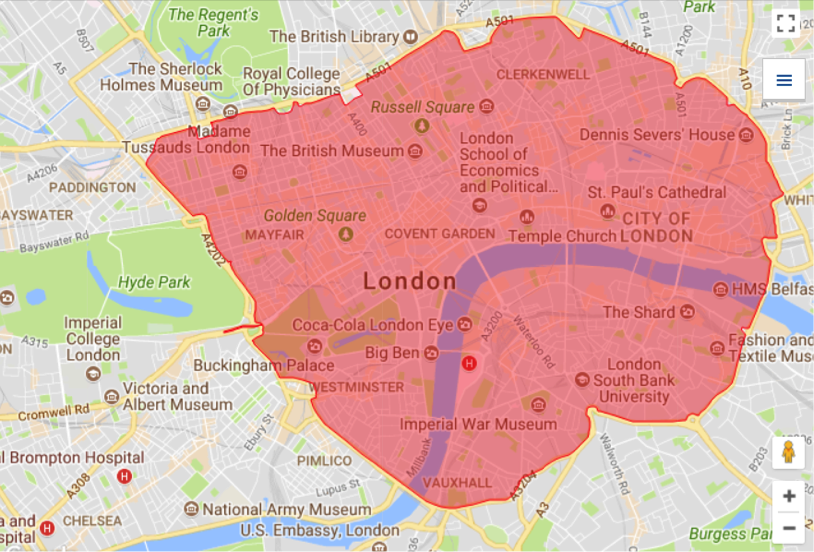 The reduction in vehicles subject to the full congestion charge was about 20% although it was accompanied by an increase in trips not subject to the charge (taxis and private hire vehicles). A significant shift from cars to transit (and to a lesser extent, biking and walking) has also been achieved, at least in part because congestion revenues were used to support improved transit. In particular, trips by transit increased from 29% of the 2002 total to 37% in 2015 (most of this by bus) while trips in cars fell from 46% to 36% over the same period. The share of bike trips doubled from 1% to 2%.

Not all of the mode shift can be attributed to the congestion charge. In outer London, where the congestion charge does not apply, the mode share of cars has also declined, albeit at a slower rate. Major new investments in bus service also occurred and road space in the central city was taken away from cars for bus and bike lanes and pedestrian areas. These latter changes have offset some of the congestion improvement for drivers.

A significant shift from cars to transit has been achieved.

London may not be a good comparison for a city like Vancouver because of its much larger population, and because its urban form was greatly shaped by a network of rail and tube stations built long before widespread car ownership. Indeed, prior to the congestion charge coming into effect, car ownership in London was much less than other cities with the share of car trips already falling steadily and the share of transit trips increasing.

Nonetheless, London demonstrates that significant shifts in travel patterns can be achieved in a relatively short amount of time. Moving forward, the London Assembly (local government) is proposing a shift from its congestion charge to full road pricing. The congestion charge is seen as a blunt instrument that does not adjust for time of day nor does it apply to large areas of the city outside the charging zone, which continue to have congestion problems.

A better case study for Vancouver is Stockholm, which is a similar size (900,000 people in the central city and about 2 million regionally) and has many bodies of water that define the 18 points of the city’s charging cordon. The system has been in place since 2007.

A notable difference from London is that vehicles are charged in both directions when crossing the cordon; that is, the system is not solely aimed at car trips to the central city. Rates vary by time of day with no charge on weekends or off-peak times (6:30 pm to 6:30 am weekdays). Costs for passing the cordon during peak times range from 1-2 euros (approx. $1.50 to $3) to a maximum of 6 euros per day ($9). Cameras capture license plate numbers and drivers are sent a monthly bill. Part of the political deal for the cordon was the creation of a bypass highway that is not subject to the charges. 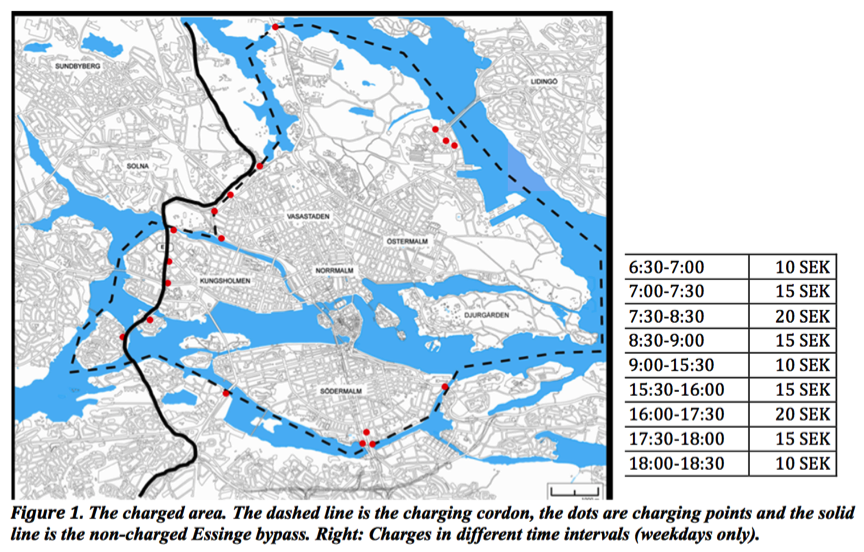 Stockholm witnessed a drop in traffic volumes across the cordon of about 25%. Of this, about 10 percentage points represented work trips that switched to transit and another 6 percentage points were changes to discretionary trips—those that switched destination, reduced frequency or were subject to combining trips that would previously have been separate. Commercial vehicle drivers also modified their routes and planning so as to cross the cordon less often. Many of the affected drivers are occasional who cross the cordon three or less days per week. Thus, it is important to recognize that not all trips are work trips and there are many ways that drivers adapt to the congestion charge.

Like London, Stockholm already had a well developed public transit system before the congestion charge came into effect and the implementation was accompanied by increased public transit services. The share of trips by public transit was over 30% before 2006 compared to 20% for Vancouver (in 2016). Upfront investments of US$300 million were made in transit in addition to $200 million in system infrastructure. According to a review of road pricing systems by the International Council for Clean Transportation, the system has been “extremely cost-effective” with primary benefits being shorter travel times (valued at US$85 million per year), increased road safety (US$18 million per year), and health and environmental benefits (US$13 million per year).

According to a review, the system has been “extremely cost-effective” with shorter travel times, increased road safety and health and environmental benefits.

Stockholm is also an interesting case study for political reasons. It tested the cordon system for six months in 2006 before putting it to a successful referendum before full implementation in 2007. The system was initially opposed but is now supported by two-thirds of the population.

Singapore is another widely cited and sophisticated system that could offer lessons to Vancouver. The city uses gantries (charging points) to charge drivers going into the central city. Rates are for each entry into the downtown area, vary by time of day and can vary from one gantry to another. The rate structure is reviewed and modified every three months to reflect desired travel speeds. Cars use in-vehicle units with stored-value smart cards from which charges are deducted rather than billing through a central system. Visitors from outside the pricing area must rent or purchase an in-vehicle unit as they are also charged.

Singapore’s Electronic Road Pricing (ERP) was implemented in 1998. It was preceded for more than two decades by a manual (and labour-intensive) system called the Area Licensing Scheme, then in the early 1990s by a manual Road Pricing System. It is harder to assess the impact on congestion of moving from a manual to an electronic system, but the estimate is that traffic volumes fell by 15% after the ERP implementation. As in London and Stockholm, road pricing is one part of a Singapore’s transportation strategy, which had high levels of public transit investment and mode share prior to implementation.

Mobility pricing: An idea whose time has come?

Mobility pricing: What happened? What’s next?