Thirsting for information: reforms to industrial water use badly needed

As British Columbians are discovering everywhere, one of the greatest and most pressing challenges posed by climate change is drought.

On Vancouver Island, pulp and paper producer Catalyst Paper pumped massive amounts of water from Cowichan Lake into the Cowichan River in 2019 to boost the river’s water levels. It was the 11th time in 20 years that the Cowichan watershed was hammered by drought.

Repeat incidents of low water have also plagued the Kiskatinaw River watershed near the City of Dawson Creek, where drought advisories have become so common that they seem like “a broken record.”

And in the Terrace region, the effects of drought are playing out in a different way. Overseas  investors have swept into the region to buy up forage lands so that alfalfa can be grown, baled and later compressed for shipment in ocean freighters. The destination for those shipments?  Drought-plagued areas in China and South Korea.

These examples and more underscore the importance of getting a good handle on how much water is being used in the province, but also on the need to implement effective policies that encourage the conservation and sound management of our most precious natural resource.

Many British Columbians understand and accept that their residential water use is tracked through meters that record the water entering their households, and that they pay municipal water authorities based on the actual water used and not a flat rate. (A notable exception to this rule is the Lower Mainland, where a flat rate applies.)

That money then goes to cover a wide range of costs including upkeep and expansion of water delivery and treatment systems. 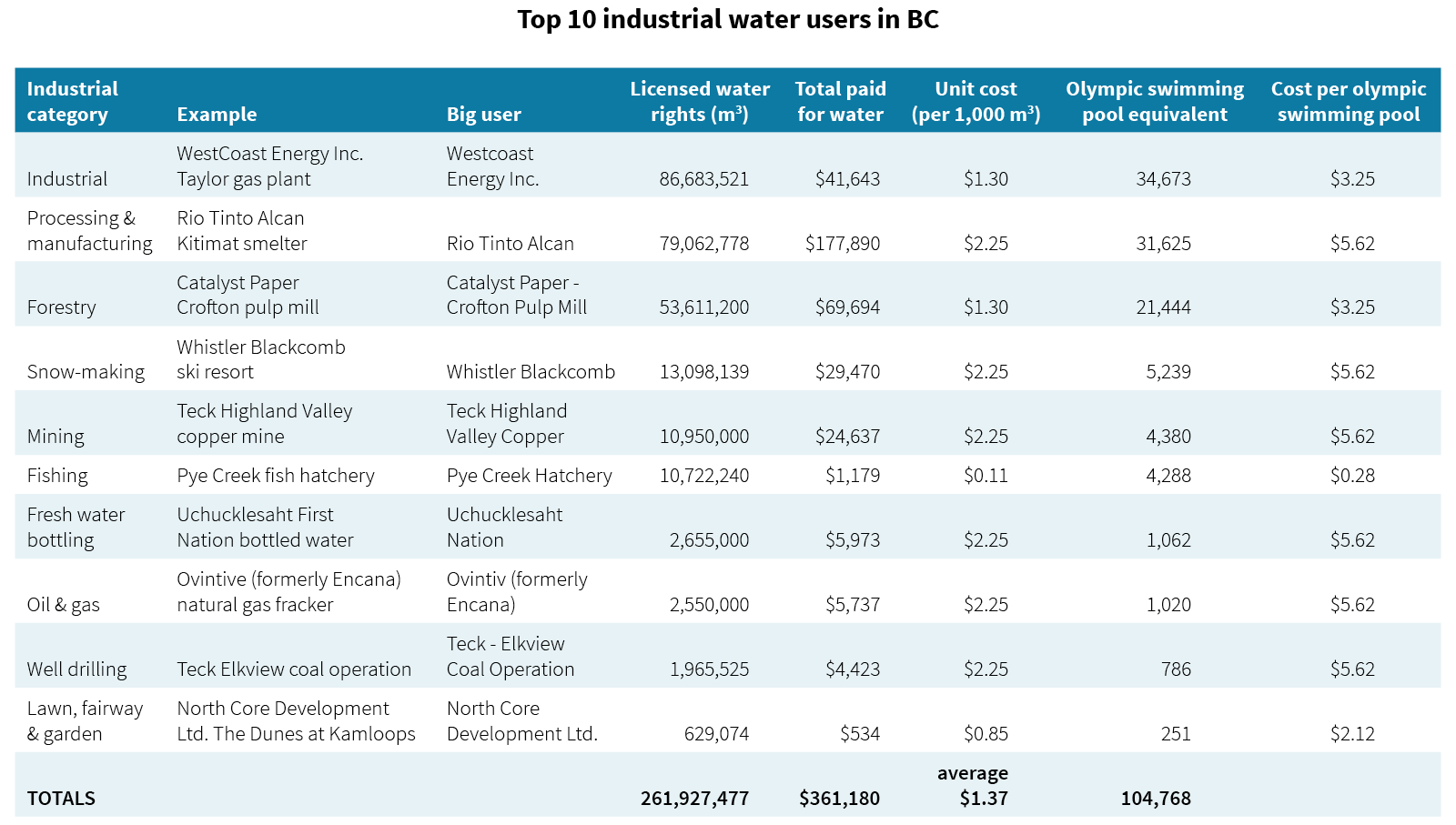 But major industries operating in the province play by a very different set of rules. They pay an incredibly small amount of money for very large volumes of water. As the Canadian Centre for Policy Alternatives has learned through analyzing various government documents, aluminum smelter Rio Tinto Alcan, coal mining giant Teck and natural gas processor WestCoast Energy pay on average just $5.62 for every Olympic swimming pool’s worth of water they consume—less than the cost of a pint of beer.

This amounts to a proverbial drop in the bucket. But making matters worse, the companies don’t even have to meter what water they use. They simply pay based on what their licenses say they can take.

The only exception to this rule—and it is a significant one—is the pulp and paper industry, which does meter its water. Pulp and paper companies pay a lower rate on some of the water they use provided they meet certain conservation targets.

But an overall lack of water metering means that understaffed and underbudgeted provincial civil servants must carry out compliance and enforcement efforts with one arm firmly tied behind their backs. How can they hold companies to account that are withdrawing the equivalent of tens of thousands of Olympic swimming pools’ worth of water when there is no verifiable data to check on?

The good news is that steering things toward a more effective, conservation-based management regime is not difficult. The government could quickly implement five straightforward changes.

First, it could require all industrial water users to meter their water use and report that usage through regular electronic filings to the government.

Second, it could publicly release industrial water use data every year, including the volumes of water consumed and the prices paid. It’s done exactly this with the forest industry for decades, only the resource was trees, not water.

Third, it could review the current fees paid by all industrial users, raise them where appropriate and introduce two-tiered pricing a la the pulp industry to encourage conservation.

Fourth, it could immediately review water use in major industries such as the fracking industry to determine whether it is sustainable and is adequately regulated.

And fifth, it could direct a portion of all water fees collected toward comprehensive watershed planning processes, that aim to improve conditions on the catchment lands surrounding streams, rivers and lakes.

Droughts may be here to say. But water policy can flow in new directions. Policies that require industries to play by the same rules that many residents do simply make sense.

Lack of water data a cause for public concern