HST referendum: was the vote split along income lines?

Was the vote was split along income lines? 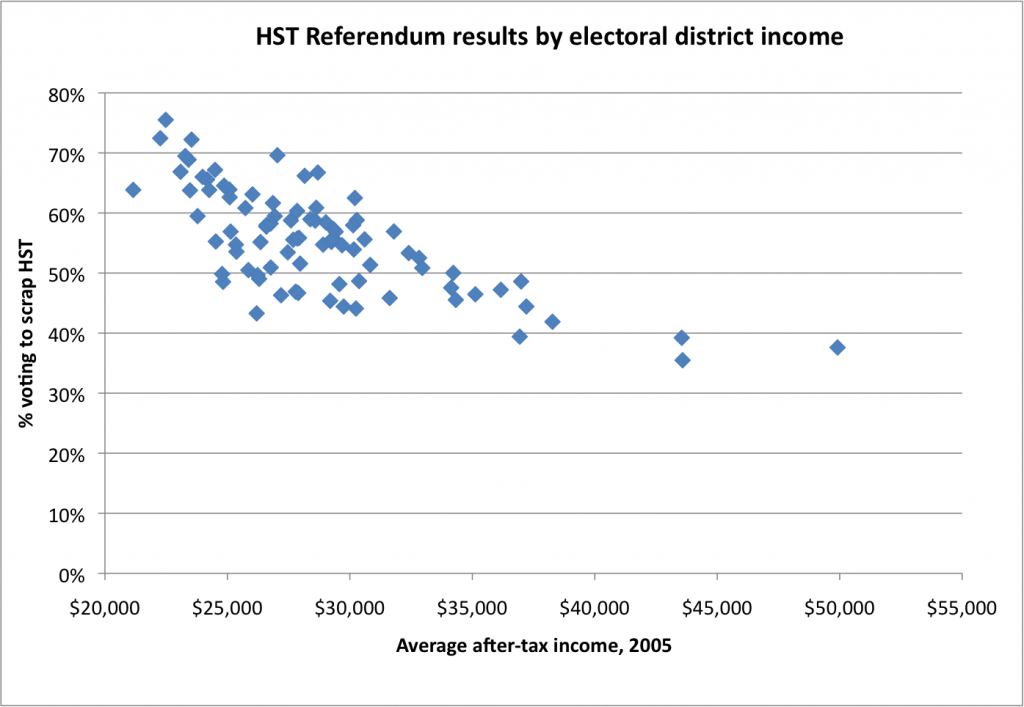 I doubt this is a coincidence. Income disparities have grown over the last decade and as our incomes diverge, so do the opportunities we have and our experiences. Social cohesion is threatened when it becomes harder and harder to think of ourselves as British Columbians, voting for the benefit of our province, and start identifying more closely with a particular social class.

A recent article by Pete McMartin in the Vancouver Sun illustrates these diverging experiences all too well:

… the efficiencies the HST promises are real…But I also think that the retention of the HST is a question of class, that business people and economists and the well-salaried members of the media can afford to view the HST as a concept rather than a real financial burden.

Is it going to stop a family earning six figures from eating out more often? No. Will that family quail at repairing a leaky roof, and the added thousands an HST will add to that repair? Again, no. That well-off family cannot only afford the more immediate costs of a leaky roof, it can afford to entertain the long-range promises the pro-HST position makes -that down the road, the efficiencies the HST provide will deliver more jobs to the economy and lower costs to the consumer.

Call me a skeptic: That promise I find hard to take on faith, given our record of growing income disparities in this country. As for those future benefits, even the independent panel’s review on the HST characterized its benefits as “modest”.

What do you make of the referendum results?

Transit referendum: if no vote wins, what is Plan B?