Kevin Falcon’s tour of northeast BC, heart of the province’s oil and gas industry, and his dissin’ of BC’s (modest but important) climate measures was one of those moments when one realizes that things could actually get a lot worse in BC politics. Falcon cut his cabinet teeth as minister for deregulation, and is positioning himself as the pro-business candidate in a party that is already way too cozy with corporations.

The BC Business Council, representing the biggest corporations and the major resource industry interests in the province, is on the prowl and they don’t want to see any more action on climate that would make our resource industries “uncompetitive”. Unfortunately, their version of “competitiveness” means massive new greenhouse gas emissions, without even creating many jobs.

Drawing on some calculations in our recent green jobs report, here’s the problem in a nutshell: 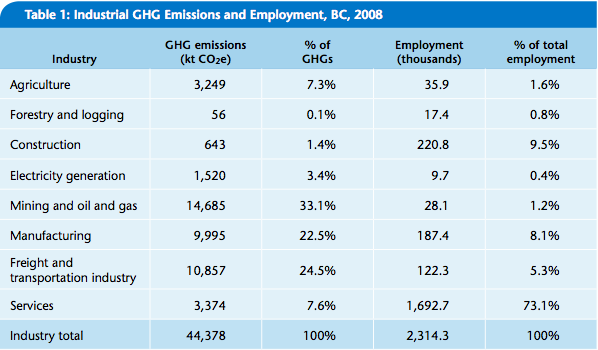 What’s most notable from this table is how much emissions are concentrated in a few major areas, but those areas are not particularly large employers for BC. Most people work in the service sector where emissions are quite small in total and on a per worker basis. Mining and oil and gas are particularly bad on this score, with just over 1% of the jobs (in spite of massive growth in oil and gas over the past decade) but a third of the industrial emissions of the province.

That’s not even counting the emissions from the product itself – fossil fuels that are burned elsewhere and supposedly someone else’s problem. Those emissions amount to double BC’s own combustion of fossil fuels, and almost eight times the BC emission count for extraction and processing by the fossil fuel industries.

It is a big problem then if BC’s government is taking too much advice from the BC Business Council. Their vision of economic utopia is extremely detrimental to the environment – not just greenhouse gas emissions, but air and water pollution, and creation of toxic tailings ponds – while barely helping at all in terms of jobs. 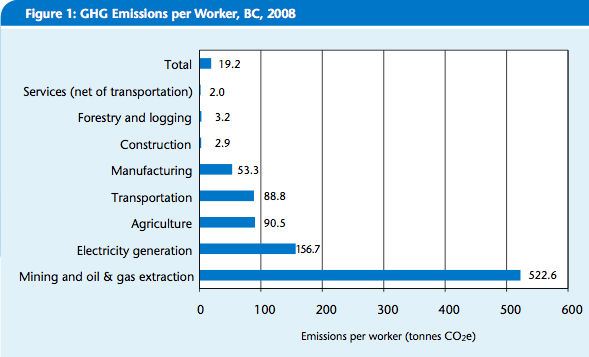 Being a leader means NOT piling on to the climate mess the world finds itself in. With BC’s reserves of natural gas and coal, we could single-handedly add three years worth of global greenhouse gas emissions to the atmosphere – that would appear to be just fine with the Business Council and would-be-premier Falcon. The real costs of boosting production will be paid by future generations and people living in areas vulnerable to climate impacts – but passing off that cost today is extremely profitable.

It is sad to see such little foresight – the future costs of climate change are way higher than the costs today of fixing the problem. Well, you might argue, no one else is doing anything so why should we? It’s a serious concern, what with the dismal state of global climate negotiations and the ascent of climate skeptics in the US Congress. Nonetheless, it is imperative that jurisdictions like BC show leadership. The costs to the economy of aggressive action are relatively small, and well-designed climate and industrial policies would make BC better off economically in the long-run.

There is an opportunity in BC’s twin leadership campaigns to break with the resource extraction mentality that has long dominated the halls of power in Victoria, and articulate a different vision of economic prosperity. Retrofitting our economy for sustainability will require a lot of work (aka green jobs) that could be catalyzed by the public sector. Moreover, our quality of life is no longer linked to higher GDP but to outcomes that can only be achieved through collective action: fewer health and social problems, better education, stronger communities, a more democratic society.

Fossil fuel expansion as a crime against humanity

So what’s a green job, anyway?