In British Columbia, climate change is no longer something abstract for the future. The late June heat dome event—that claimed 500-600 lives—and the wildfires that followed confirm that climate change is a clear and present danger that’s not going away any time soon.

Cooler and wetter weather setting in by late August probably prevented 2021 from setting the new record. Before a return to rain and winter make us lose focus, here are some lessons from the 2021 wildfire season.

1. Climate change is costing us

Our horrific summer of wildfires points to large and growing financial costs of climate change. The February 2021 BC budget allocated $136 million for firefighting expenditures. As of the first quarterly update, that estimated cost has been raised to $881 million. This is a new record, topping the $615 million spent in 2018/19 and $649 million in 2017/18.

Up to the 2018 budget, the annual allocation for fighting wildfires was a mere $64 million. After the 2017 and 2018 wildfire seasons, it was raised to $136 million in the 2019 and subsequent budgets. Yet, firefighting costs have vastly exceeded that $136 million in every year but one since 2014 (in 2016 the cost was $129 million, but this was double the budget allocation for that year of $64 million).

Going back to 2008 the average cost of fighting fires in BC is $301 million per year. This ongoing need for firefighting should be reflected in the February budget. 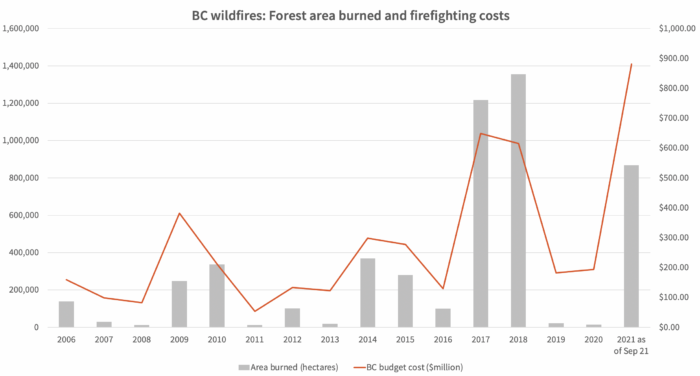 Budgeting an amount that is only one-third the real costs in recent years is a budgetary form of climate change denial—a belief that an extreme wildfire season only happens rarely, rather than being a “new normal” for the province.

Publicly funded firefighting is just one dimension of cost. Public costs also include the rebuilding of public infrastructure and other emergency spending (estimated at $33 million in the budget update).

Our horrific summer of wildfires points to large and growing financial costs of climate change.

Other private costs include insured and uninsured losses, lost income and out of pocket expenses. For example, the wildfire that destroyed the town of Lytton was estimated by the Insurance Bureau of Canada to have led to $78 million in insured damages alone.

Finally, there are also personal costs of deaths and smoke-related illness that are hard to put into dollar terms (not to mention impacts on wildlife).

As a massive pulse of carbon dioxide into the atmosphere, wildfires affect BC’s overall carbon balance. We do not yet have a good estimate of the emissions from the 2021 wildfires, but the 2017 wildfires released an estimated 163 million tonnes of CO2, and the 2018 wildfires 200 million tonnes.

In comparison, BC’s official greenhouse gas tally was 68 Mt in 2018, meaning the wildfires that year led to emissions almost three times as large as all of the emissions from powering our homes, vehicles and industries.

Wildfire numbers are not counted in our official GHG tally because they supposedly represent “natural disturbances” rather than impacts of human economic activity. But these wildfires are not acts of God, they represent climate change in action – the consequence of human use of fossil fuels for energy. And our over-heating atmosphere makes no distinction between the GHG emissions we choose to count and those we choose to ignore.

Outside of BC, wildfires were a force down the west coast to California. Wildfires were also notable in Siberia and part of Europe. The Copernicus Atmosphere Monitoring Service estimated that emissions from wildfires in the Northern Hemisphere this summer amounted to 2.6 billion tonnes of carbon dioxide. These emissions are the equivalent of 6% of global full-year carbon emissions from the use of fossil fuels for energy, and they make it even harder to stabilize global climate change.

3. Wildfires show us the folly of “net zero” strategies that emphasize tree planting and other forest offset schemes

Both the federal and BC governments have engaged in creative carbon accounting with our forests. In the name of net zero emissions, a new federal Greenhouse Gas Offset Protocol is in the works to create opportunities for large industrial emitters to buy credits instead of reducing their emissions.

Carbon offsets have been much criticized in the past as snake oil, by providing credits against ongoing fossil fuel emissions by paying others to reduce their emissions instead, or protecting forest lands. But forests—including the millions of publicly funded tree seedlings being planted under provincially and federally funded tree planting programs—can burn down, be killed by insects or be logged for wood a few decades hence. South of the border, in Oregon and Washington, forest offset projects literally burned to the ground this summer.

Offset credits are notoriously prone to manipulation and even fraud because they are estimated in relation to a counterfactual scenario of how the world would otherwise unfold. It’s very hard to ensure such credits would be permanent and/or that such actions would not have happened anyway.

The federal government has long sought to use our forests as part of our commitment to action on climate change. For example, Canada is claiming 27 million tonnes of carbon towards its 2030 GHG target in the form of allegedly better stewardship of our managed forest lands (lands used for forestry as well as parks), planting two billion trees and using other “nature-based solutions.”

This accounting is wishful thinking based on a gerrymandered subset of Canada’s forests because forests affected by insect infestations and forest fires have been removed from the count. The reality shown in Figure 2 is that Canada’s managed forests have become a massive source of carbon emissions, not a carbon sink. Much of this is due to insect infestations, logging activities (generally as well as in response to such infestations), slash-burning following logging operations and wildfires in BC. 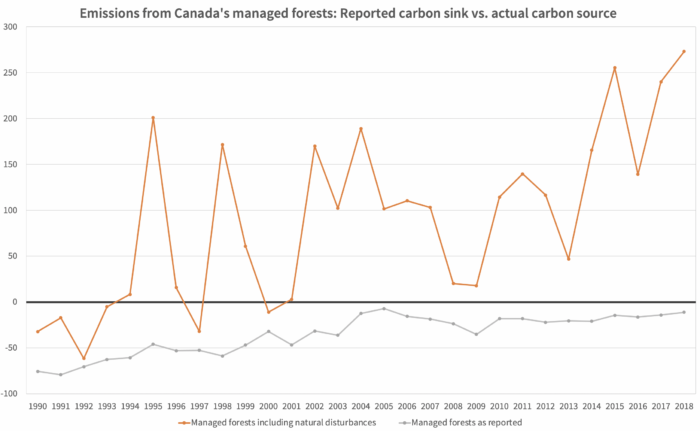 Summer 2021 was also dominated by ongoing protests of old growth logging at the Fairy Creek watershed on Vancouver Island. Current logging practices affect the carbon balance between BC and the atmosphere. BC’s logged forests are a source of carbon emissions rather than a carbon sink (by absorbing carbon dioxide from the atmosphere).

Our remaining old growth forests represent vast stores of carbon and they must be protected. A 2021 study by ESSA Technologies of the economic value of BC’s forests estimated the linkages between forests and BC’s carbon balance. It found that protecting stands with trees older than 140 years would store substantially more carbon in those forests, in some cases turning logged forests back into a carbon sink.

Of course forests are much more than the carbon they store. They support intact ecosystems and wildlife habitat and have intrinsic value as life itself. Nonetheless, they should be managed in ways that are consistent with other climate actions in the province. One caution here is that we should not fall victim to crafty accounting deceptions that pretend conserving forests and ecosystems gives us extra credit in the form of reduced obligations for lowering fossil fuel emissions. To meet our Paris commitments, we need to stop burning fossil fuels as quickly as possible and we need to engage in tree planting, forest conservation and better management practices to suck up that excess atmospheric carbon.

Our remaining old growth forests represent vast stores of carbon and they must be protected.
To make matters worse, in BC there are plans to cut Northern Boreal forests to produce wood pellets for export as a “carbon neutral” fuel source. BC already exports pellets overseas to jurisdictions like the United Kingdom, where they are used as a supposedly carbon-neutral fuel that displaces coal for generating electricity. Shipping pellets made of waste wood halfway around the earth for this purpose is of dubious benefit, but actually cutting trees to that end is contrary to global climate action.

5. Other costs of climate change need to be better understood

In the wake of a summer from hell, many are calling on BC to up its game on climate, in particular ending the use of fossil fuels for energy.

Unfortunately, that will not end extreme fire seasons, but if BC does its part to get emissions to zero, and so does everyone else around the world, we can stop things from getting worse. To get back to anything close to the “old normal” humanity needs to be in a negative emissions position by the second half of this century.

For the foreseeable future, we will have to contend with heat waves, wildfires and floods. With good planning we can be better prepared. Some 500-600 people didn’t need to die during the heat dome event, which we saw coming many days in advance. Based on heat waves in other places it was clear that seniors in homes without air conditioning, among others, were vulnerable. We failed them and need to commit to doing better next time.

In some of these cases, reducing emissions and stronger adaptation/preparation go together. Many households that had installed heat pumps for low-carbon warmth in the winter found out that they also provided cooling during the heat dome. Planting trees provides shade to protect from extreme heat as well as locking up carbon.

We now live in a province where a wildfire could burn down your home, or your grandmother could die in a heat wave. BC needs to respond to this new normal by reducing real greenhouse gas emissions and adopting comprehensive adaptation plans rooted in principles of climate justice.

Ottawa’s fixation with trees and climate: What exactly are we planting?