Hochstein and the demand to cut union wages

Hochstein is president of the Independent Contractors and Business Association of BC – representing non union construction corporations. He is the public face of the hard right in British Columbia and has a long history attacking unions. He opposed raising the minimum wage and supports, through the HST, shifting taxes off corporations and on to working people.

While the views in his op-ed come as no surprise it is worth having a look at their validity and perhaps speculating on the makeup of the growing chorus supporting his views.

Hochstein complains that local government taxes have been rising faster than the cost of living. He is not the first to make this complaint. The Canadian Federation of Independent Business makes this complaint so regularly that last May the Union of BC Municipalities (UBCM) was finally moved to respond.

The UBCM acknowledged that local taxes had gone up faster than the Consumer Price Index. They then showed the reasons why. The fastest areas of growth were protective services, parks and recreation. These are areas where the public has demanded more services from local governments. Whether you agree with it or not, the demand from the public for more police on the streets is almost unlimited. As a percentage of total costs, general government expenditures – the cost of running local governments – has actually declined. 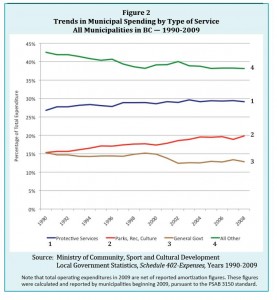 One other thing is worth noting here. Based on the most recent Stats Can figures available, local taxation in BC is significantly lower than the national average.

Hochstein’s next complaint is twofold. First, public workers are paid better than private sector work, and second, municipal wages went up during the recession.

Both accusations are correct. How does this come to be? One of the most important reasons why average wages are higher in the public sector is that there is less discrimination in wages.

CLC Economist Andrew Jackson has published some excellent work on this.  He quotes one report saying:

He cites another study finding:

Based on the 2006 census data, this study shows that visible minorities and Whites receive similar pay for similar jobs in the public sector. By contrast, in the private sector visible minority men earn significantly less than observationally comparable Whites.

Discrimination against women and minorities does not appear to rank highly in Hochstein’s priorities.

And yes, because of long term contracts signed prior to the Olympics, wages for government workers did go up faster than inflation during the recession. But over the last ten years they have gone up more slowly than those for unionized private sector workers.

Now Hochstein is no fool. He is aware of all these things yet he continues to make arguments that do not stand up to scrutiny.

In this he is not alone. These are the same arguments made by the Canadian Federation of Independent Business, the Fraser Institute and the many Fraser Institute clones such as the Frontier Centre.

And these are exactly the same arguments we are hearing by the Tea Party Republicans in the United States and the billionaires who back them. Their goal is not just the reduction of taxes; it is the undermining of progressive forces that oppose their view of the world. For them attacking unions is not just about driving wages down, though that is important to them, it is about undermining one of the only forces left today pushing a progressive agenda.

Make no mistake, Philip Hochstein and the people like him look admiringly to Governor Scott Walker and his agenda for Wisconsin. Their policy agenda is low wages and high taxes for workers and a monopoly on power for corporations.

The Union of BC Municipalities Convention: a potpourri of policy