Yesterday, the Fraser Institute released its Consumer Tax Index report, which claims to show that the average Canadian family’s tax bill has increased by a whopping 1,624% since 1961. There are a lot of things wrong with Fraser Institute’s math. Here are just a few of them.

On top of inflation, we need to consider that incomes also grew over the last half century, so the tax bill would have grown even if we paid the same proportion of our income in taxes in 2009 as in 1961.

What we need to compare, then, is not the change in absolute dollars that families pay in taxes, but the change in the share of family income that goes to pay for taxes.

In 2009, the average family paid 41.7% of their income in taxes (at least according to the Fraser Institute — but they count business taxes as part of the family tax bill, which is highly problematic as I explain in a previous post).

In 1961, families paid 33.5% of their income on taxes, but by 1969 they were paying 39% and in 1974 they paid 43.4% of their income. So, if you compare the 2009 effective family tax rate to 1961, you will find a 25% increase, but you will only find a 7% increase since 1969 and an actual decrease since 1974. Therein lies the peril of summary statistics – calculating the percent change over time crucially depends on your starting and ending point. A few years either way would result in completely different numbers.

And we wonder why people are so suspicious of statistics.

The best way to avoid this kind of statistical tricks is to show as much of the underlying data as possible and let people see the patterns for themselves. The Fraser Institute reports plots taxes as a share of income in Figure 4 of their report, which I have pasted below. 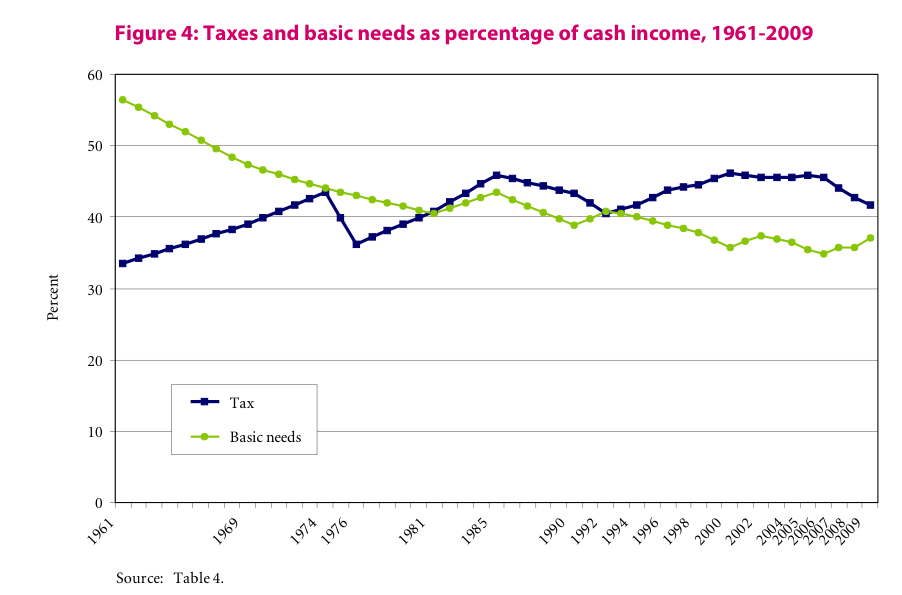 The Fraser Institute’s conclusion that “the average Canadian family’s tax burden has been rising steadily for the better part of 48 years” is clearly not supported by their own graph.

The share of income going to taxes rose quite fast in the 1960s and in the decade between 1976 and 1985 but has hovered around 45% ever since. This graph clearly demonstrates that the latest Fraser Institute report is much ado about nothing – the effective tax rate as a share of average family income has been stable over the past quarter century.

The Fraser Institute’s alarm over tax increases captures the tax increase over the 1960s, when many of Canada’s core social programs, such as Medicare, were first established.

No news here, folks, unless you are interested in picking up some tricks on how to present statistics in a way that makes the growth of a spending item of your choice appear larger than it really is.

How have taxes changed over the last half century