Everyone is talking about the high price of gas in Metro Vancouver, which hit a new record in May, topping $1.60 per litre. The story making the rounds is that taxes are to blame—in particular the April 1 increase in BC’s carbon tax. Some have seized on this moment to call for tax cuts to ease the pain at the pump for drivers.

However, a closer look at what is driving price increases shows that it is gouging by the industry—not taxes—that is to blame. Factors controlled by industry (i.e. non-tax market factors) include the cost of crude oil, the margin taken (or mark-up) by refineries, and the margin taken by gas retailers.1 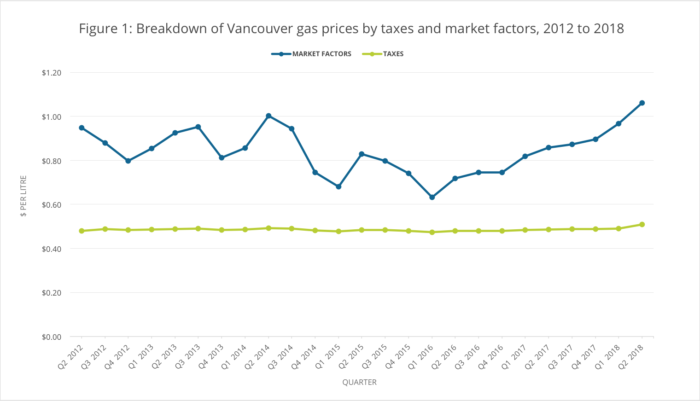 Figure 1 breaks down the pump price (for unleaded gasoline in dollars per litre) into two components: (1) all market factors together (in blue); and (2) combined federal, provincial and regional fuel/carbon taxes (in green).

Figure 2 shows the sources of the 46.4 cents per litre increase in price at the pump between the first quarter of 2016 and the second quarter of 2018. The cost of crude oil is the biggest factor, up 32.3 cents per litre. This is a reflection not of production costs, but that we pay the going world oil price (less adjustments for quality and transportation). This price increase is thus pure profit for oil producers.

Further, margins on refining crude oil into petroleum products are up 8.5 cents per litre from the 2016 trough. The refining of Vancouver’s gasoline is partially done in Alberta, then shipped to BC along the existing Trans Mountain pipeline. Some refining is done at the Parkland refinery in Burnaby (purchased from Chevron in 2017). Parkland recently issued a press release citing a record fourth quarter of 2017 profit of $469 million (its first quarter owning the Burnaby refinery).

Finally, retail margins are up 2.2 cents per litre from the first quarter 2016 trough. Retailers generally don’t make a killing, so their increased margins may reflect the shrinking number of gas stations in Vancouver and greater market power for those remaining. It could also reflect higher rents arising from increasing land values in the region. 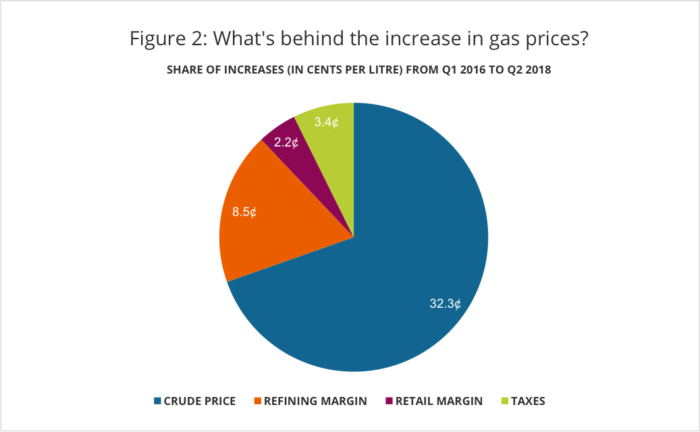 Source: Author’s calculations based on the Kent Group

The current story really begins in late 2014 when crude oil prices tumbled. While crude oil prices fell 68% between first quarters of 2014 and 2016, the full price at the pump fell by only 18%. In other words, refiners and retailers stepped in to take greater profits on the down side. Compare this to the almost instantaneous increases in price at the pump whenever there is an accident, bad weather or any other excuse that industry could use to justify a price hike.

Figure 3 shows this dynamic, breaking out market factors (equal to the blue line in Figure 1) into three component segments: crude oil price, refining margin and retail margin. In recent years each industry segment has been taking a bigger cut and driving up prices at the pump.

This finding is of interest given the wolf cries from Alberta that BC is causing them to lose billions of dollars in oil revenues by opposing the Trans Mountain Pipeline Expansion (TMX). In 2016, BC consumed 4.6 billion litres of gasoline. Regional breakdowns are not available so let’s assume about half of this amount, or 2.3 billion litres, is consumed in Metro Vancouver (which has just over half of the provincial population). At between 20 and 30 cents per litre of excess profits going to the industry, this amounts to $460 to 690 million in price gouging on the part of Big Oil just in the last year.

What about those taxes?

Taxes on gasoline did go up between 2008 and 2012 due to the phase-in of the carbon tax and higher regional fuel taxes in support of the transportation network (transit and major roads and bridges via TransLink). Drivers in Metro Vancouver now pay 25.5 cents per litre in fuel taxes (of which 17 cents is TransLink’s regional share) and 7.8 cents per litre in carbon tax. The remaining taxes are the federal gas excise tax of 10 cents per litre (which is recycled back to cities for infrastructure projects) and the federal GST of 5%.

Altogether, current tax levels amount to 50.8 cents per litre, slightly higher than in Montreal (50.4 cents), and more than Toronto (40.3), Halifax (41.9) and Calgary (35.8). But the gap from non-tax market factors between Vancouver and those cities is larger: recent gas prices excluding taxes in Vancouver were 106.3 cents per litre, compared to 89 cents in Montreal, 84 cents in Halifax, 94.9 cents in Toronto and 91.1 cents in Calgary. So, gouging.

While it is easy to pick on taxes, those revenues are needed to build and maintain the road and transportation system that drivers need to get around. Without these taxes, governments would either have to curtail spending on the transportation infrastructure or increase other taxes.

Drivers actually get a good deal for taxes paid. For example, filling up a 40-litre gas tank would lead to about $20 in taxes—but once that is done, driving on the region’s roads and bridges is free. A car of average fuel efficiency can travel about 400 km on a tank of gas, while those in hybrids or more fuel-efficient cars can get anywhere between 600 and 800 km on that $20 fill-up.

While current tax levels in Vancouver are slightly higher than in Montreal, Toronto, Halifax and Calgary, the gap from non-tax market factors is larger.

A person who drives a lot, say 20,000 km per year, would pay about $1,000 in gas taxes. That may sound like a large sum, but consider a heavy transit user in Metro Vancouver would have to pay $1,500 for a two-zone pass for a year, and $2,000 for a three-zone pass. Not only does the transit cost more, but transit riders must share space with other riders and spend more time than drivers to travel the same distances.

Driving may be expensive, but most of those costs are private costs: buying and maintaining a vehicle, insuring it and filling up the tank. Drivers do not pay the full cost of their rides when we account for the public costs of building and maintaining free roads, bridges and parking spaces, and of providing policing and related public services, not to mention the costs imposed on third parties due to noise, air pollution and carbon emissions. If anything, driving is already heavily subsidized, and cutting taxes would make this worse.

Moreover, if we were to cut taxes this would only reward the egregious profiteering of Big Oil. It would amount to a transfer of income from the public sector to the oil industry. Moreover, it would make it cheaper to drive—and so more people would, thus worsening congestion. Fuel tax cuts would also likely require cuts in public transit, meaning more people would have to travel by car, which would also further compound congestion problems.

It’s time to regulate this industry—the same way we regulate other utilities like electricity and natural gas prices in BC. Even the synchronized weekly up-and-down swings of gas prices in Metro Vancouver could be tamed by a more regulated market. We even have a BC Utilities Commission that could step in to bring some sanity to the market.

Higher gas prices are ultimately a good signal to households to reduce driving where they can, shift trips to transit and, over the medium-term, buy more fuel-efficient if not fully electric vehicles. Regulating prices alongside a steadily rising carbon tax is a better way of inducing these changes than the market-driven shocks many drivers are now experiencing.

Across-the-board cuts in gas taxes clearly do not make sense, but in the short term it’s worth considering some relief for low-income households. With the high cost of housing, more people are forced out of the central city or more convenient transit corridors to car-dependent areas. Better transit service is needed but many low-income households cannot change their mobility patterns overnight.

A good model is the low-income carbon credit funded out of the carbon tax. Increasing this amount would directly benefit low-income households to address the regressive price increases we are seeing. Taxing excess profits from the industry could fund such a credit and then some.

Regulating prices alongside a steadily rising carbon tax is a better way forward than the market-driven shocks many drivers are now experiencing.

The current spike in gas prices is a wake-up call. We need to sharply reduce our dependency on gas—a need amplified by the recent (unconstitutional) threats from Alberta to cut off supplies to BC—and to cut our carbon emissions and air pollution. Greater public transit infrastructure and service hours, along with a switch to electric vehicles, is key. But we also need to reduce our automobile dependency, since many people cannot drive due to low income, age or disability. Every car a household can get rid of frees up thousands of dollars per year that can be used on other priorities.

In the meantime, don’t buy the tales told by anti-tax groups. The data show that over the past few years it’s price gouging, not taxes, that is putting Metro Vancouver drivers over the barrel.