British Columbians have heard many “too good to be true” claims about the benefits the province will receive by launching a liquefied natural gas (LNG) export industry. The CCPA-BC’s LNG Reality Check series has been examining these claims, and what we have uncovered is a pattern of misinformation about LNG – coming primarily from the BC government, which should be looking out for the public interest instead of blindly championing the industry.

The BC government has repeatedly claimed LNG will create 100,000 jobs in BC. However, the regulatory filings made by LNG proponents show that job creation from new LNG terminals would be very small. For example, if Petronas’ Pacific NorthWest LNG becomes a reality, it would create only 200-300 permanent jobs. The smaller Woodfibre LNG facility, proposed near Squamish, would create only 100 permanent jobs.

True, there would be more employment during the construction phase, but only temporarily – about 3,000 jobs for three years in the case of Petronas; and 600 for Woodfibre. There would also be gains to the upstream gas sector, but adding it all up we don’t come anywhere close to 100,000 jobs – even if BC launches 5 LNG plants, something only the BC government believes will happen.

The claim of 100,000 jobs is based on a report – commissioned by the BC government – in the lead-up to the 2013 (pre-election) Throne Speech. Key assumptions, data, and even the economic model used (what economists call an input-output model), were all provided by the BC government to the consultancy, and senior bureaucrats were in on it every step of the way. No wonder that on closer inspection it amounts to an exercise in exaggerating job prospects at every turn. 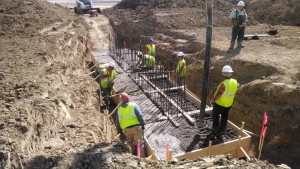 Debt-free BC (aka $100 billion Prosperity Fund)!

This claim is based on a fantasy world where (a) BC launches a massive LNG industry that is equivalent to one-third of all current world LNG exports; (b) those exports fetch top dollar in Asia; and (c) BC puts in place a tax and royalty regime that captures a fair share of those gains.

None of this is happening. Market prices for LNG in Asia have crashed – at prevailing prices, a company exporting LNG from BC would lose money on every tanker load. The economics of LNG will continue to be terrible for the foreseeable future, due to massive new supplies, from Australia in particular, coming onto world markets.

No Prosperity Fund has actually been created. The BC government proposed an LNG income tax to retain a share of LNG profits in BC. Under pressure from the industry, the LNG tax the BC government did introduce is miniscule, and is offset by a cut in corporate income taxes. Further, it only applies after all capital costs have been deducted, which means BC taxpayers will be paying for any cost over-runs.

Even if we assume prices for LNG in Asia go back up to profitable levels, BC government revenues will only inch upwards. The much-heralded Petronas deal would add about $0.2 billion per year, and possibly much less. Compare that to the BC budget’s $46 billion in revenues and total provincial debt of $43 billion.

BC’s Natural Gas minister Rich Coleman claims BC has 2,933 trillion cubic feet of gas in reserve. While there may be this much gas in the ground, most of it will never be profitable to extract. Typically no more than 10-20% of what is called “in-place resources” can be recovered from shale gas deposits.

More realistic estimates come from the province’s own Oil and Gas Commission, which says proven gas reserves (tested by actual drilling) are only 42 trillion cubic feet, and the total “marketable resource” is 416 trillion cubic feet. The latter is one-seventh the claim made by the minister.

Based on numbers from the National Energy Board, a successful BC push for LNG would make Canada a net importer of gas within a few years. By locking up gas supply in exports to Asia, the BC government’s plans undermine energy security in Canada.

Water impacts will be minimal

Today’s intensive horizontal drilling and hydraulic fracturing (“fracking”) practices bear no resemblance to the traditional natural gas industry. Sand, water and chemicals are forced into wells, cracking rock a couple kilometres below the surface. Once used in fracking operations, water is so contaminated it must be kept in tailings ponds.

Another risk is that drinking water supplies in northeast BC aquifers could also be contaminated by fracking, as they have been in other parts of North America.

The government argues water impacts from hydraulic fracturing will be minimal by averaging out withdrawals across all of northeast BC. In reality, impacts are highly localized. Peak water consumption for an LNG industry is equivalent to 22,000 Olympic-sized swimming pools per year – water removed from the hydrological cycle forever.

We are no longer talking about “natural” gas when fracking is the extraction method. Some commentators argue that we should call it liquefied fracked gas or LFG.

The BC government argues that LNG exported to Asia will displace the use of coal to generate electricity in China. While this is plausible, there is no guarantee this substitution would actually take place. In other potential markets like Japan, LNG could displace nuclear power, thereby adding substantially to GHG emissions.

In any event, lower emissions from burning gas instead of coal only apply at the point of combustion. Because methane (the principal component of natural gas) in the atmosphere is 86 times more heat-trapping than carbon dioxide, small leaks at points along the supply chain (from wellhead to final combustion) can wipe out any emissions advantage, and then some.

In addition, LNG is very energy-intensive, requiring some 20% of gas to be consumed in the liquefaction, transport and re-gasification processes.

Climate change is principally caused by extracting carbon from below ground and putting it into the atmosphere. When we add it all up, BC’s plans for LNG are equivalent to adding 24 million cars to the roads of the world (and not hybrid or electric ones).

So why would the BC government tell such tall tales about the benefits of LNG?

Because it’s a heist.

The BC government’s plan will essentially privatize a finite, public resource worth hundreds of billions of dollars – the shale gas below ground – and lock up that supply to foreign corporations for decades into the future. To make that happen the government has resorted to grossly overstating the benefits from LNG, as well as the available supply, while downplaying the massive environmental and climate risks from moving forward.

A BC framework for LNG, part one: the carbon benchmark