In its August 2016 climate plan update—and subsequent advertising campaign—the BC government put forests front and centre. While this may sound positive, it is really a sleight of hand by a province seeking to shirk its responsibility to reduce fossil fuel emissions.

The BC government claims (without providing any evidence) that its vaguely defined forest measures will translate into emission reductions of 12 million tonnes of carbon dioxide per year by 2050. This represents nearly half of the emission reductions claimed in the government’s inadequate climate plan, which actually means that BC’s 2050 emissions would be four times larger than BC’s legislated 2050 target.

Many researchers in BC have been interested in the carbon storage potential of the province’s forests. This is important work because the climate crisis has reached such a level that all forms of action will be needed to have a chance at stabilizing the climate.

In BC the devastation wrought by the mountain pine beetle is indicative of climate change.

Forests are indispensable to absorb some of the carbon already emitted, but these efforts are only credible if accompanied by reductions in fossil fuels. Indeed, the government’s new climate plan neglects to mention how a proposed and much-hyped liquefied natural gas (LNG) export industry would massively increase BC’s emissions.

Climate change is primarily a problem of fossil carbon – the extraction and combustion of coal, oil and gas for energy purposes, which puts heat-trapping carbon dioxide and methane into the atmosphere. This growing blanket of carbon is warming the planet, leading to extreme weather events and rising sea levels.

In BC the devastation wrought by the mountain pine beetle is indicative of climate change. Winters in the Interior are no longer cold enough to kill enough beetles to keep their populations in check. Furthermore, dead and dying trees, particularly from wildfires, represent additional carbon in the atmosphere that used to be locked away in BC’s forests.

Details on the BC forest carbon plan appear mostly to consist of tree planting on land affected by the beetle, plus reducing slash burning. To this end, the BC government has granted $235 million to the newly-minted Forest Enhancement Society of British Columbia. Some 300,000 hectares of land impacted by the mountain pine beetle will be rehabilitated.

Reforestation is needed in these beetle-kill lands, and if anything more funding over a longer period of time will be required. Additional strategic planning around forests and carbon will be necessary due to warming temperatures and the resulting impact on the land base. Efforts to plant trees, improve forestry practices and, perhaps most importantly, conserve intact old-growth forests are thus central to good carbon management and stewardship.

Counting increased potential storage of carbon in forests instead of reducing fossil fuel emissions is folly. It’s like trying to use Canadian Tire money to pay your taxes.

However, trying to count increased potential storage of carbon in forests instead of actually reducing fossil fuel emissions is folly. It’s like trying to use Canadian Tire money to pay your taxes.

Combusted fossil fuels can stay in the atmosphere for thousands of years, however, efforts to stash more carbon in forests may only be temporary. Due to the long timeframes involved, fires, insect infestations and human activity in the future may put any carbon stored back into the atmosphere. And we do not understand well what species need to be planted now to thrive in a warmer province many decades into the future.

To illustrate the difference, consider the figure below. The red bars show BC’s GHG emissions as conventionally reported. This includes: use of fossil fuels for energy use (buildings, transportation, industry); other agricultural, waste and industrial non-fossil-fuel emissions; and net deforestation (conversions of forest land to other uses). Emissions have been fairly stable going back to 1990, rising up to the early 2000s, declining up to 2010, then rising somewhat in recent years. 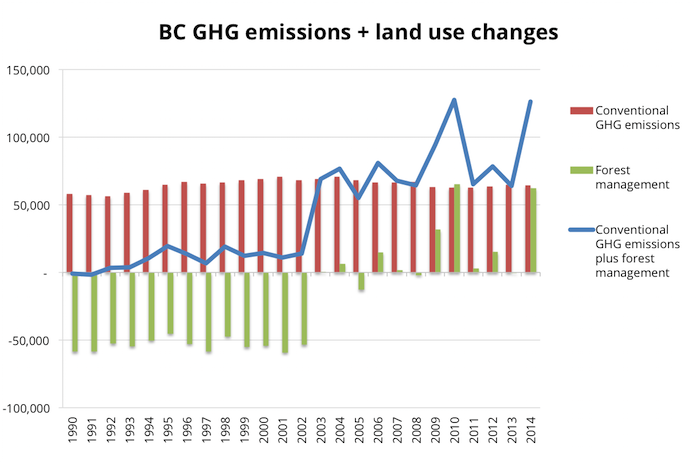 The green bars show the emissions associated with “forest management” – numbers that are not counted in the conventional GHG total. Forest management emissions are negative up to 2002, meaning BC’s forests were a carbon sink. After 2003, this was no longer the case – instead of a carbon sink, forests have been a carbon source, largely due to the beetle kill and wildfires.

The 2016 BC climate plan is a promise to turn back time to the pre-2003 era when forests were a carbon sink.

The blue line adds the red and green together – this represents the total emissions within BC’s borders from all sources, conventional and land use. Based on the blue line, the BC government in 1990 could have claimed it needed to do nothing to reduce its fossil fuel emissions because of the forest carbon sink.

In the wake of the beetle kill, forests become a carbon source, and 2014 emissions (in blue) are roughly double the conventionally reported GHGs. Back in 1990, no one would have even predicted that such a turn of events was possible.

The 2016 BC climate plan is a promise to turn back time to the pre-2003 era when forests were a carbon sink. The plan takes advantage of BC’s small population on a large and forested land base to assert the province does not need to reduce its production and consumption of fossil fuels.

This is a dangerous delusion intended to cover up for the government’s vastly insufficient response on climate action. We must accept there are no easy ways out: taking real climate action means rapidly reducing fossil fuel emissions. On that front, the new BC climate plan fails to provide the leadership it claims.

A Call to Action on the Forest Front