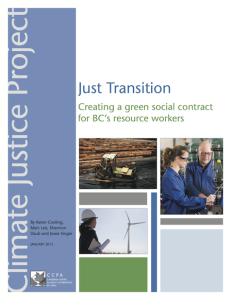 In late January, we at the CCPA came out with a paper about “just transition”—an approach that aims to minimize the impact of environmental policies on workers and communities in affected industries—for resource workers.

I sat down with one of the report’s coauthors, Karen Cooling, a former resource-sector worker and union representative who specializes in relationship-building between resource workers and environmentalists.

You’re particularly qualified to have written this paper, not just as an expert or academic, but also as someone who lived through a transition. Tell us a bit about what you went through.

I was hired at a pulp mill in Gold River in 1977. I worked in a number of departments but spent most time in lab doing quality and environmental testing.

Years passed, and in 1998 it was announced that the mill would be closing permanently. It was shocking and painful for a lot of people, who now had to figure out what to do next, where to go, how to have the same quality of life, and how to help their children cope with all the changes.

Not only that, but Gold River was a tiny community that relied on a single employer—the mill—for about 87 per cent of tax revenue, which would now be drying up. There were not a lot of options for people who wanted to stay put.

Your next move had you continuing to experience transitions from another perspective. What was your next experience?

After I left the mill, I was hired by the Communications, Energy and Paperworkers Union and eventually became their expert on small town mill closures.

The situation that I lived through repeated itself again and again—in Port Alice, in Prince Albert, in Mackenzie…  Regularly, families and communities were left to fend for themselves—and I developed some strong opinions on what should be done and what wasn’t happening for people and communities.

What have you learned about these transitions, both from your own experience and from researching your CCPA paper?

The hardest-hitting thing, perhaps, is how truly alone people felt in dealing with the transition. There weren’t programs, training, or even financial support easily accessible to them.

And there are difficult decisions to be made: On one hand, you could stay in your community—but work opportunities aren’t plentiful and the standard of living will often drop. On top of that, children have to handle their friends moving away, while adult’s social networks are also eroded.

On the other hand you may decide that you’re going to leave. You sell your house—which, keep in mind, is the major financial instrument for working class people—but its value has plummeted. Then trying to buy a home again is very difficult, especially in a larger town with higher property values.

Was it easy to find people willing to talk about this?

For this paper, we thought it was very important to tell the human stories of this experience rather than just focusing on statistics. With this in mind, we made some phone calls and connected with people, and it was fairly easy to line up quite a few people who were interested in sharing their stories.

We mainly interviewed forestry workers—there’s been a huge loss of employment in that sector in the last two decades—along with a few people from oil and gas, as well as some provincial government employees involved in resource oversight whose departments had been downsized.

The Just Transition paper is not just about dealing with resource sector “busts” but also about how we can transition away from fossil fuels and toward “good green jobs”. What does that look like to you?

In order to meet our environmental obligations, we need to look at ways of winding down the fossil fuel industry that don’t leave communities and families in the lurch. We’ve learned a lot from what has happened in forestry, and we need to start preparing and applying best practices. Fossil fuel industries are profitable—doesn’t it make sense to put aside a bit of money today so that these companies don’t just throw these workers away with no support when the jobs are drying up?

We need to be realistic when it comes to transitioning these workers, and that means we need to look toward good green jobs. A good green job isn’t just one that doesn’t pollute, or that has a zero or near-zero carbon footprint, but a job that pays well, supports families, is safe for workers, and that allows people to have dignity and a good life.

What are some examples of those jobs?

We also already have a lot of good green jobs in the public sector that could be expanded: Education, healthcare, public transportation, and many other public sectors are well-positioned to provide good green jobs, as well as much-needed services in communities.

What should job options look like in rural resource communities?

In smaller communities we would be arguing for more value-added jobs in forestry and other resource industries, as well as the expansion of industries like tourism and investment in the public sector jobs I mentioned.

The long and short is that people should be to be able to choose to live in these communities—not everyone wants to move to the big city. And good green jobs are the answer.

What needs to happen to make this a reality?

We need to invest in programs that comprehensively provide access to training and apprenticeships, extend income support for people who need that training, and that would perhaps even provide money for communities that have to reinvent themselves.

Apprenticeships are particularly important for older workers who—when they started—received more on-the-job training and weren’t required to have formal training in advance.

We also need to adopt a better approach to alternative ownership with respect to businesses and work. The resource sectors are quite dominated by the major companies—smaller operators, cooperatives, First Nations, and others need to be able to access resources for work in rural communities.

What do you think oil, coal, or gas workers would say to your recommendations?

I’m sure many of them are very worried about what winding down fossil fuel industries means for them, and some would be cautious about getting on board. But I think they’d understand that the transition policies we’re talking about are really important.

What needs to be clear is that we’re not saying “we want to kill your job tomorrow”; we’re saying that when the end comes we want to make sure workers aren’t left with nothing. We are looking out for workers and communities with these recommendations.

What was the best part of writing this paper?

When we interviewed people, it was such an honour to know that they trusted us with their personal stories. They were sharing with us what was probably one of the worst experiences in their entire lives, and trusting us to try to do something positive with that.

—
Learn more and read the full report by visiting policyalternatives.ca/justtransition.

So what’s a green job, anyway?

Lindsey Bertrand is Communication & Digital Engagement Specialist at the CCPA-BC.