How is it that we have seen a non-stop construction boom in Vancouver over the past decade-plus and yet we still have huge homelessness and affordable housing problems? In the Figure, based on data from the BC Economic Accounts, it’s pretty clear that as a society we spend a lot building new housing. It varies cyclically but over the past decade, BC has consistently spent more than 8% of its income (GDP) on residential construction, and in some years (like 2007) almost 10%. Between 1981 and 2012, the lowest that figure ever got was 5% of our GDP. To put that in dollar terms, BC spent $19.5 billion on new housing in 2012. 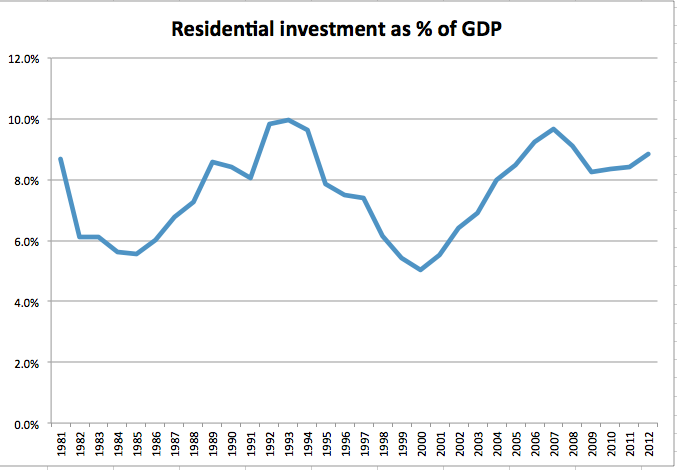 So it’s not like we are are failing to build new housing. The problem is that there’s a fundamental mis-match here between what we need in terms of new housing and what we are getting. Much of the conversation around housing affordability has been around the need for densification to accommodate new people coming to Vancouver, and this has set off pitched battles about what that density looks like. But the more important issue is what kind of housing we are building, and for whom.

Earlier this year, the Organization for Economic Cooperation and Development (OECD, a policy think tank of the rich advanced countries), put its finger on the problem. Its economic survey of Canada comments (p. 16):

Multi-unit housing construction has increasingly favoured condominiums over purpose-built rental buildings over the past decade. Although a significant share of condominiums in major cities is rented out, they typically have higher rents and represent a less stable housing supply for tenants.

The survey summarizes a more detailed research paper, Deconstructing Canada’s Housing Markets, that is well worth a read. It suggests some reasons for this dynamic (p. 32):

Private developers have favoured condominium development over purpose-built rental buildings because of the higher returns and lower risk involved. Condominium units can be presold, whereas purpose-built rental buildings must be fully constructed before being rented out. … [as well as] preferential tax treatment of owner-occupied housing, which is not subject to tax on imputed rents or capital gains upon sale, whereas investors in rental property are taxed on rental income and 50% of capital gains at their marginal income tax rate. Increasing expectations of capital gains may have made these tax biases more important over time.

The OECD paper looks at Canada as a whole, noting that Vancouver and to a lesser extent Toronto are driving these adverse trends. All of which confirms what most people see on a daily basis: new condo developments advertising their status as luxury and exclusive, which inevitably excludes most local residents who cannot afford to buy in. More supply and greater densities in this situation do not lead to housing affordability, especially in the context of an ongoing influx of well-heeled immigrants and investors from other parts of Canada or overseas.

There is an interesting debate happening about what density should look like: towers vs mid-rise. I’m caricaturing a bit here, but check out Gordon Price’s case for towers, while Patrick Condon is more supportive of mid-rise. That’s an important conversation about how we envision our communities in the future, and the role density plays in ensuring where people are more able to walk and bike and take transit to work, shops, parks and public services. But it misses an important dimension: affordable housing has to be built into the fabric of how we design those communities.

What’s that look like? Inclusionary zoning is an approach that carves out a percentage of newly constructed unit as affordable. In a similar bent, we could waive parking space requirements, and trade density for affordable housing. More fundamentally, we need more purpose-built rental stock like we used to build from the 1960s to the 1980s. Housing cooperatives and community land trusts could lock in affordability on an ongoing basis. In our neoliberal times we also seem to have forgotten that the public sector can build new housing stock, too. Why not cut out developers, and their 25% profit margins on the sale of new units, in favour of a public housing development corporation?

Another ignored aspect of affordable housing is where we build. Most of the push for densification is in areas of Vancouver that are already at the minimum densities considered to be “sustainable” communities. But this turns a blind eye to vast swathes of the city that are low density, single-family-home areas. Consider this map of density in Vancouver (full pdf here): 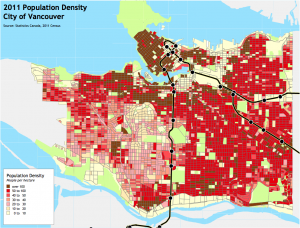 There are large areas of town (the lighter coloured areas) that are super-low density, but that are walking and biking distance from downtown. It’s fair to expect some increase in density in East Vancouver near Skytrain stations. But how about rezoning Shaughnessy, where the average density is one-third that of Grandview-Woodlands (neighbourhood level data compiled here)? It’s not impossible — after all, Grandview was the original Shaughnessy, and still has many of those old mansions, now converted to smaller apartments, accompanied by lots of infill development.

At the end of the day, Vancouver is an attractive locale. People will continue to move here. But we are building lots of new supply, just not necessarily the right type of supply nor in the right places.