How to build affordable rental housing in Vancouver

We are often told that building affordable housing is just too expensive: land prices are too high, construction costs are rising, development fees and labyrinthine bureaucratic processes are stifling projects. There is some truth in each of these explanations, but to really get a major build-out of affordable housing we need to stop relying on the current private, for-profit approach in BC and Canada. To achieve the public goals of affordable housing—and the related social and economic benefits—we need to expand the stock of non-market and co-op housing with public-led approaches and non-profit development.

This post does the math on how it can be done in pricey Vancouver. To address the housing affordability crisis, in previous research we called for 10,000 new, non-market, rental units per year to be built in Metro Vancouver. These numbers are necessary to keep up with population growth and to alleviate the imbalance in the rental housing market. This piece looks at the costs of building that housing and how it can be delivered at much lower rents than for newly built market rental housing. These break-even rents cover the upfront construction costs of building new housing and this housing thus pays for itself over time.

The case for non-profit development

Vancouver has had a major construction boom over the past decade. But too often new supply from for-profit developers has been luxury condos aimed at affluent households and investors, rather than affordable housing for people who live and work in the city. The tax and regulatory structure in BC and Canada makes it much more profitable for developers to build condos. For-profit developers can also bid more for land than non-profits, and having bid up the price of land, this makes it even harder to justify building rental units instead of condos.

About 30 per cent of Metro Vancouver condos get rented out, and these investment properties have been the main source of increased rental housing for a couple of decades. The resulting tenants have less security of tenure than in dedicated (or purpose-built) rental apartments and they are vulnerable to renovictions and other legal and illegal evictions. The situation also shows that investors are competing for the same units as people looking to buy their own home, a process that keeps prices high.

Local governments have attempted to shift the needle back to purpose-built rental construction and/or inclusion of a portion of rental units that are more affordable by waiving development fees and providing additional density. These projects have taken a great deal of time and can lead to neighbourhood tensions about high-rise development perceived to be excessive. Purpose-built rental housing developments have brought some new supply into the market, but the resulting market rents are generally expensive relative to average incomes. An exception to this is an even smaller handful of units of genuinely affordable housing for those in need, which are negotiated through programs like Vancouver’s Moderate Income Rental Housing Pilot Program (MIRHRP). The jury is still out on this program (see this Tyee debate on the City of Vancouver’s MIRHRP, here and here).

A hidden assumption in this conversation is that for-profit developers must lead in the delivery of new housing supply, even as this model seems unable to deliver the affordable housing we need.

A hidden assumption in this conversation is that for-profit developers must lead in the delivery of new housing supply, even as this model seems unable to deliver the affordable housing we need. For-profit developers are building with the expectation of reaping current market prices for their units, whether rental (e.g., $1,800 to $2,400 per month for a one-bedroom) or ownership (e.g., $600,000 to $800,000 for a one-bedroom). But these prices are simply out of reach for the vast majority of renter households, which have lower than average incomes to begin with.

Table 1 shows the results of an analysis by Coriolis Consulting for the region of Metro Vancouver. Factoring in construction, land, developer profits and financing, a resulting typical one-bedroom (575 square feet) would need to rent for between $1,942 to $2,970 per month just to “break even” (i.e., to pay for the initial capital outlay plus interest over time, including a 15 per cent developer profit margin), depending on the type of construction and the cost of land. A small two-bedroom (750 square feet) would need to rent for $2,528 to $3,869 to break even.

Looking at non-profit development as an alternative case, the range of break-even rents drops to between $1,357 to $1,995 for a one-bedroom and $1,765 to $2,597 for a two-bedroom (the low end assumes wood-frame construction and free land). That is, depending on the scenario, private for-profit development leads to much higher rents, with 43 to 49 per cent higher rents for equivalent units depending on the case—$600 to almost $1,300 per month. 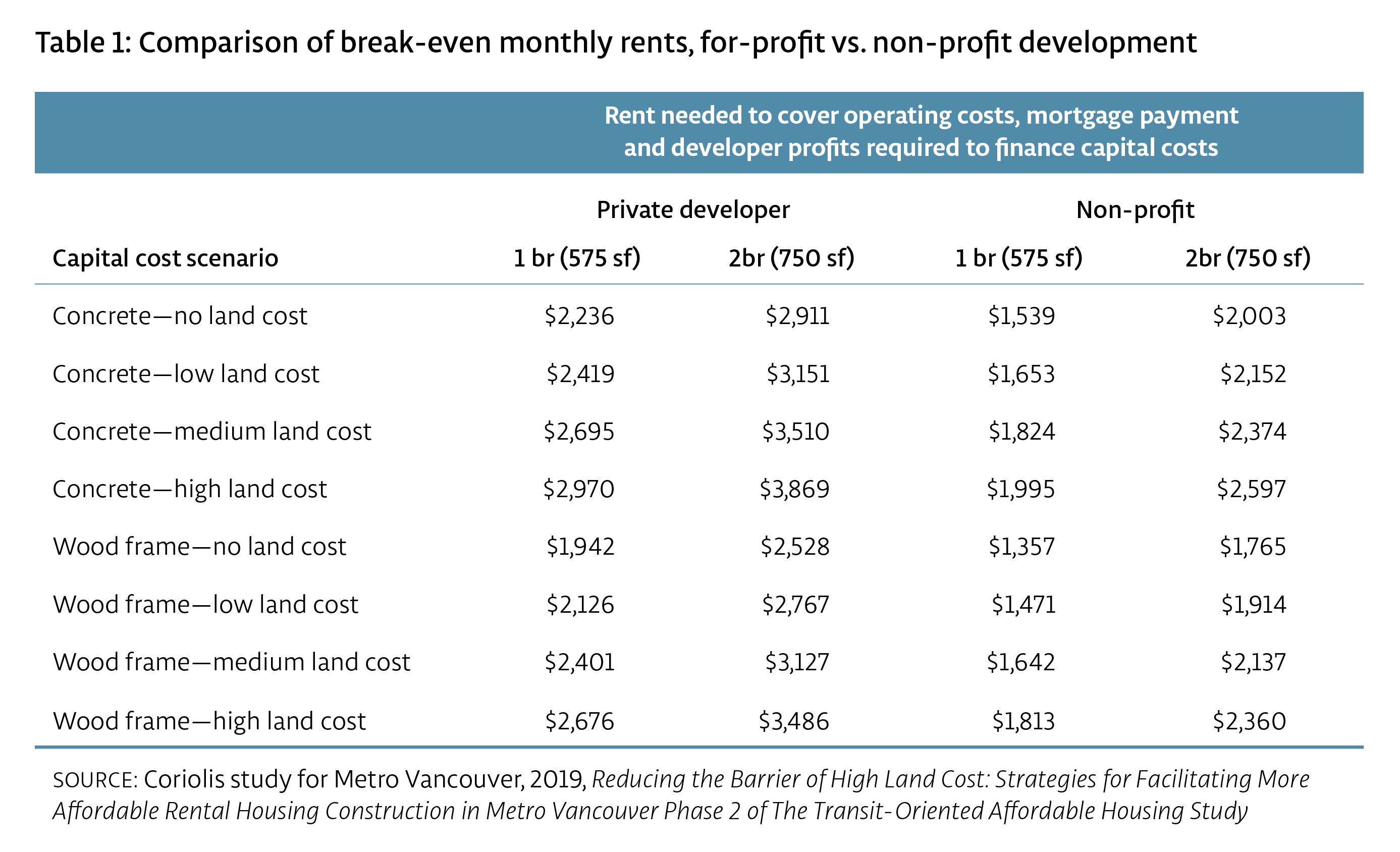 To fix this broken market at its source, we need to greatly expand the non-profit development and delivery of non-market housing. In the Coriolis case, the expected developer profit (15 per cent of land and construction costs) is reduced to a 5 per cent non-profit admin fee. Non-profits can access preferential financing via the Canada Mortgage and Housing Corporation (CMHC), and capital can be repaid over 50 years (instead of 35 years for private development).

This analysis tells us a few other things about building housing:

Let’s build on this analysis, sticking with non-profit development and public or community-owned land or low-cost land. This could include: land owned by a non-profit society or a government; land acquired through transit development; land currently zoned for low density but that could be rezoned for higher density; and, new public land acquired from the proceeds of more progressive property taxation.

Table 2 estimates the average break-even rent of new non-market housing. These rents are a function of total capital costs amortized over a 50-year period plus monthly operating costs. I follow the general approach of Coriolis (in Table 1) but with a number of different design parameters, based on conversations with experts in non-profit housing development. Results in Table 2 are for somewhat larger one-bedrooms (600 square feet) and two-bedrooms (850 square feet), plus a three-bedroom case (1100 square feet), and more common area than in the Coriolis case. Even though all of these increase baseline costs per unit, they are more liveable for future tenants.

For construction we estimate hard costs at $365 per square foot for concrete construction and $320 for wood-frame based on advice from non-profit developers. These rates are higher than the widely used Altus construction cost guide, largely due to additional expenses for infrastructure upgrades typically imposed on projects by municipal governments. We estimate soft costs (architecture, engineering, legal fees) at 30 per cent of the wood frame construction.

To lower costs, we assume underground parking requirements are eliminated, a non-trivial expense that can range from $42,000 to $63,000 per space. We also assume municipal development fees (DCLs and CACs) are waived, and lower financing costs can be achieved by government-backed borrowing. At 2 per cent per annum, this is a conservative assumption as CMHC lending for non-profit developers is currently below 2 per cent. We also assume a waiver of federal GST on completed housing.

Table 2 shows that break-even rents could be as low as $1,273 per month for a one-bedroom, $1,641 for a two-bedroom and $2,009 for a three-bedroom for wood-frame construction with contributed land (and include monthly operating costs for constructed units). These rents are much lower than current market rents but consistent with sound economics. New units would be locked in at affordable rates (vacancy controlled so that rents could not be hiked when tenancy turns over), and managed by community housing organizations. 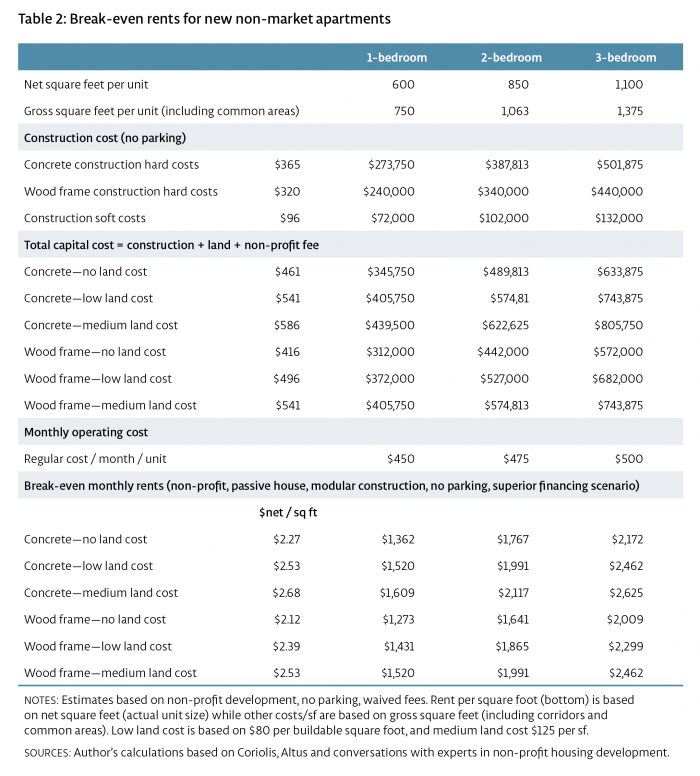 Apart from the contribution of public or highly subsidized land, we do not assume any further government subsidy to renters in determining average break-even rents. That is, the projects are rooted in real-world experience in building housing that pays for itself over time. However, we note that an additional government capital subsidy of $100,000 would lower monthly rents across the board by $264 (not in the table).

Deeper affordability could be achieved through a cross-subsidy within a building or series of buildings. Rather than all one-bedrooms renting at the break-even rent of $1,273, for example, one-third of the units could rent at the average, while one-third could rent at $750 per month and one-third close to a market rate of $1,796. Similarly, the middle tier could also pay slightly higher rents to further deepen the affordability available to the lowest income households. Many combinations and tiers of a sliding scale are possible.

To be genuinely affordable, housing costs must not exceed 30 per cent of household income. At $30,000 per year of income, rent of $750 per month meets this test. For people with the lowest incomes, some additional public income or rent support would be needed to ensure affordability at 30 per cent of income.

Scaling up the model

The break-even rents calculated above are indicative of current practices and costs in Vancouver. Over the medium-term, rents could be further driven down if we conceive of a big bang build-out, which could achieve economies of scale to lower costs. Imagine a stable, dedicated workforce that builds this housing over a generation, with long-term relationships that promote job security and options allowing workers to access new units in exchange for more stable wage rates. Costs could also be lowered through the use of standardized templates or blueprints for replicating buildings on different sites.

Recent studies point to modular construction techniques lowering construction hard costs by about 20 per cent compared to regular construction, while trimming building times up to 50 per cent. While this holds long-term potential, achieving cost-savings requires some economies of scale in production so that bigger panel factories can supply many projects across the city and province.

The current moment in BC includes new requirements for higher energy efficiency (known as the BC Step Code), leading towards a mandate for net-zero buildings (i.e., buildings that generate as much energy as they use over the course of a year) by 2032. These changes make it harder in the short run to achieve the economies of scale necessary for lower-cost modular construction, while builders, engineers and architects adjust their practices and methods to the new code.

Imagine a stable, dedicated workforce that builds this housing over a generation.

At the regulatory level, financing costs would be reduced with faster regulatory approvals through pre-zoning to allow buildings that meet certain specifications and fast-tracking of non-profit projects. Faster approvals and reduced permitting delays would also catalyze non-market development, which typically needs development permits and building permits in hand before financing can be finalized.

A more well-developed non-market housing sector could also lower costs by having more integrated management and maintenance spanning multiple buildings, or through developing co-op housing where members contribute sweat equity to the management of collective housing.

For all of these reasons, break-even rents could be even lower than conservatively described in Table 2. The missing pieces are additional and more progressive property taxation to acquire land, and supportive regulatory policies laser focused on building the housing we really need.

Ultimately, we need to break away from a dominant mindset that sees private sector property developers as the primary builders of housing. Scaling up the non-profit development of non-market housing on public/community-owned land is the key to achieving the public goal of affordable housing over the long-term.

The CCPA–BC thanks the Vancouver Foundation for supporting this research.

Affordable housing and jobs: Now is the time to build