Yes, a $15 minimum wage makes economic sense for BC

I was excited to see one of the two main political parties in BC — the BC NDP — promise to raise the minimum wage to $15 if elected next spring. This puts the idea of a $15 minimum wage squarely on the political agenda.

I’ve long argued for the need to significantly increase BC’s poverty-level minimum wage (most recently here and here). Currently, our province has the lowest minimum wage in the country ($10.45), despite having some of the highest costs of living, especially housing. A minimum-wage worker working full-time in BC earns less than the poverty line both before and after tax. Recently announced minimum wage increases over the next two years won’t change this.

And while any proposal to increase the minimum wage by any amount seems to be met with dire warnings of massive job losses and impending economic doom, neither history nor academic research supports these claims. Just last year, CCPA published a report by UBC economics professor David Green who reviewed the academic evidence on minimum wage increases and concluded that a $15 minimum wage makes good economic sense for BC.

Professor Green found that the likely impact of a $15 minimum wage on job losses would be much lower than feared. His research indicates that overall, the benefits of raising the minimum wage through a series of staged increases would far outweigh the costs.

This is because a $15 minimum wage would significantly boost the income of low-wage workers as a group and is large enough to lift full-time workers out of poverty. Unlike the typical (small) minimum wage increases we’re used to, a raise to $15 would mostly affect non-teenagers and would therefore have a much greater impact on working poverty.

Recent statistics show that about one out of every four employees in BC earn $15 or less (this share was stable in 2014 and 2015). 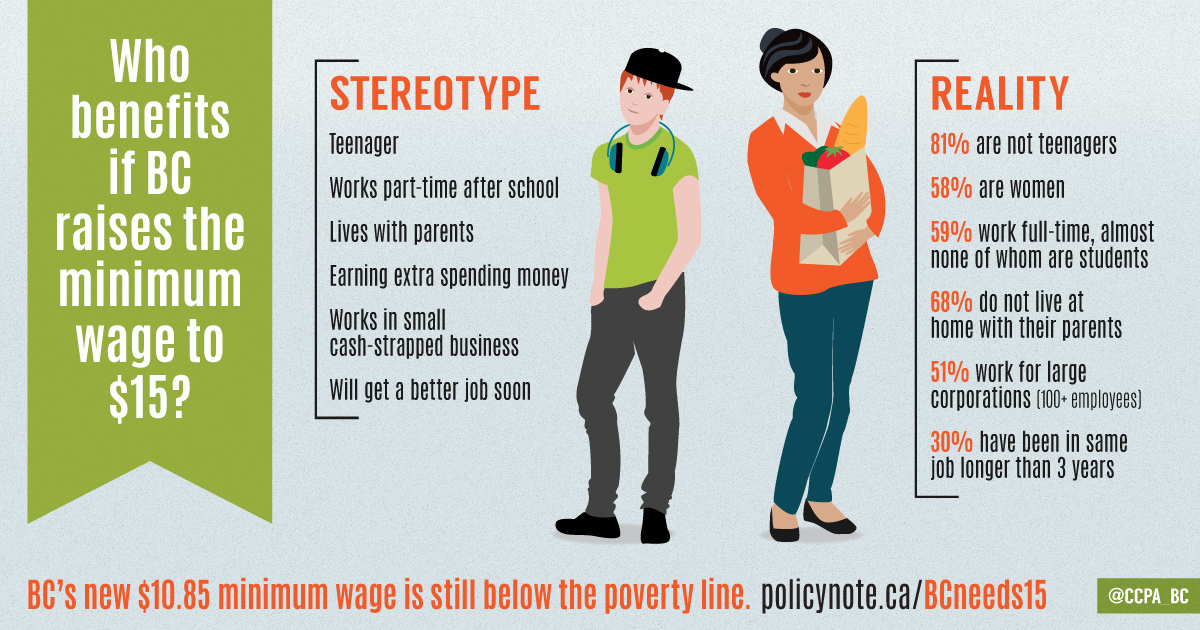 For more on working poverty and how to reduce it, stay tuned for my new CCPA report tomorrow.

Clarifying the difference between the minimum and living wage

Refuting the tired claims of those opposed to minimum wage increases