BC needs a full public inquiry into fracking

Last year, more natural gas was produced in British Columbia than at any point in the past 10 years.

That may come as a surprise to some people who thought that growth in BC’s natural gas industry hinged on the emergence of a Liquefied Natural Gas sector. It does not.

The reality is that even without a much-hyped LNG industry, natural gas production in BC jumped 70 per cent over the past decade with major customers, including Alberta’s tar sands industry, fuelling that growth. And the situation is poised to intensify, with one major player in the industry predicting a doubling of natural gas production and a fivefold increase in the output of gas byproducts (including pentane, butane and condensate), within just two years time. Again, absent LNG.

The ecological, human health and safety, and climate costs associated with producing all that fossil fuel is generally very poorly appreciated by those of us living in the urban southwest corner of the province. But ask people living on the front lines about the consequences—the First Nations, farming families and rural communities in the northeast region of BC—and a litany of problems is quickly listed off.

The ecological, human health and safety, and climate costs associated with producing all that fossil fuel is very poorly appreciated.

A troubling increase in earthquakes. Contaminated groundwater and surface water sources. A sprawling network of unauthorized dams. Rapidly escalating industrial water use and contamination. Massive fragmentation of Indigenous lands and lost opportunities to carry out traditional hunting and fishing activities. Troubling increases in methane emissions at gas wells and other natural gas industry facilities. Ongoing threats of sour gas leaks that can kill and maim.

The time is long overdue for a wide-ranging formal public inquiry into how natural gas is produced in British Columbia.

What changes are needed? Particularly when we know that every unit of increased gas production in BC requires the use of hydraulic fracturing or fracking—brute force technology that rams massive amounts of water below the earth’s surface to “liberate” gas.

Until recently the BC government, which heavily promoted LNG, was utterly dismissive of any suggestion that fracking posed risks. But with a new minority government, the door may finally be opening for natural gas drilling and fracking to get the long overdue public scrutiny they deserve.

One thing that wasn’t talked much about during the spring election was that the NDP’s 2017 campaign platform called for a review of fracking.

“Most of BC’s natural gas is produced using hydraulic fracturing, a process that has been used in north eastern BC for decades,” the platform read. “With the potential of a significant expansion of gas production in the years ahead, we will appoint a scientific panel to review the practice to ensure that gas is produced safely, and that our environment is protected. This will include assessment of impacts on water and, given recent minor earthquakes in the area, what role gas production has in seismic activity.”

The time is long overdue for a wide-ranging formal public inquiry into how natural gas is produced in British Columbia.

Given the known impacts associated with recent fracking operations in the province, the NDP’s commitment is a starting point. But to be meaningful and effective that commitment must go well beyond simply appointing a scientific panel.

The reasons why are numerous. Here are just a few.

Given such realities, a full public inquiry is the least British Columbians deserve. An inquiry where public meetings are held, where witnesses are called and testify under oath, where independent experts provide services as needed, and where a final public report is issued. 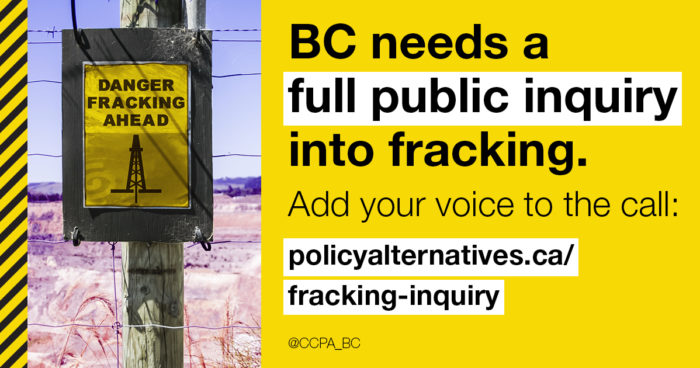 Such an inquiry should not be limited to scientific questions (in many cases the science is already in) but should focus squarely on the risks associated with fracking and what should be done about them, including taking a hard look at the adequacy of provincial regulatory oversight and enforcement, and the compliance of fracking companies with existing laws and regulations. It should also cast a wider net addressing important questions such as:

There is a long history in BC of periodically subjecting management of the province’s forests to independent public scrutiny. To date, no such scrutiny has been focussed on the province’s oil and gas sector.

Our new provincial government would provide a valuable public service in immediately rectifying that.

The CCPA is one of 17 organizations calling for a public inquiry into fracking in BC. You can add your voice to the call here.