BC government using affordability excuses to underfund education and health

Affordability is becoming the new buzzword of the BC government. In the dispute with teachers, for example, the Minister of Education has repeatedly argued demands for lower class sizes and improved class composition, as well as fair wages, are unaffordable and unrealistic (see here). When parents and businesses make the case for more public funding for child care, fed up with the high fees and long wait lists, the official government line is that BC can’t afford a $10/day program (see here).

But what does affordability mean for a provincial government? And what are the consequences of not investing in our children’s care and education from the early ages on?

Make no mistake. BC is underfunding key public services like education and health care despite loosening fiscal pressures as the deficit is eliminated. Our provincial budget analysis flagged this back in February:

Despite talk of skills training, there is little in this budget to fund improved accessibility and affordability of training programs. The budget for education is projected to increase by less than 1% annually over the next three years. This fails to account for inflation and population growth and represent a cut in real terms. What is more worrisome, student spaces in public institutions in advanced education are projected to fall by 5,000 spaces over the next three years.

Healthcare funding is projected to increase, but at much lower rates than what we’ve seen over the last 5 years (less than 3% per year).

In fact, overall government spending is shrinking as a share of GDP and is projected to reach a record low level in 2017.

A recent report from the Conference Board of Canada, a business think tank, confirms our analysis. The report is behind a steep paywall ($310!!) but an article in the Vancouver Sun summarizes the findings here:

B.C. will need to spend $1.6 billion more than it has budgeted on education and $1.8 billion more on health care to maintain a constant level of spending over the next three years [accounting for inflation and population/student projections], according to a newly released Conference Board of Canada report.

The report, entitled British Columbia Fiscal Snapshot: Back on Solid Ground, notes that the 2014 budget caps education spending to increases of 0.6 per cent per year between now and 2017, “a rate of growth that has only occurred once in the last 10 fiscal years.”

The provincial government’s decision to underfund health care and education has nothing to do with affordability as defined by our ability to pay. You can watch me explain this in more detail in a short video, recorded at a public event hosted by the Langley Teachers’ Association in July.

To sum it up: our ability to pay for education, and other much-needed public services, depends on two things: the size of our economy and our tax rates.

Our economy is not booming, but the BC budget projects it to grow by 19% over the next 5 years. This is before adjusting for inflation, but so is the BC government’s estimate that teachers’ demands for wages, class size and composition funding would add up to 14.5% over five years. Future economic growth would easily cover those.

Is it reasonable to expect that economic growth will translate into improvements in education? I’d say so.

Going back to the BC budget, here’s how growth in government revenues compares to projected growth in spending on key services over the next 3 years. 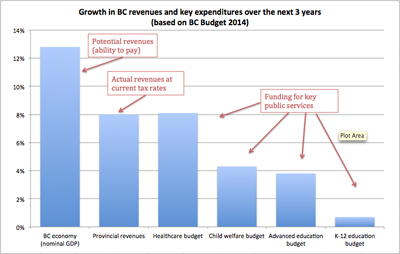 The thing to keep in mind is that governments choose how much revenue they have available to spend on programs by setting tax rates. Saying there’s no money in the budget for education improvements doesn’t mean we can’t afford it. It just means we can’t fund them with our current taxes.

We can choose to increase tax rates. And there’s a lot of support for investing in solid education both among BC citizens, as we found in our polling research, and among economists, as SFU Economics Professor Krishna Pendakur points out here.

Investing in excellent education for all BC children, in high quality health care system and in other important social services is not only realistic and affordable, it’s fundamental for building the kind of just and sustainable society we all want to live in.