A toxic spill and communications chill

So here’s the little that we know about a pipeline break that occurred more than half a year ago and that British Columbia’s Oil and Gas Commission feels for whatever reasons the public is best kept in the dark about.

The incident occurred on August 19 of last year when a 35-year-old pipeline broke and spilled its poisonous contents onto a nearby property.

In three separate interviews with three different people who have knowledge of the incident and who spoke on an “information only” basis, it was confirmed that whatever was in the liquids that burst from the broken pipeline that day killed at least one cow and sickened other cattle.

The toxic spill occurred just outside the city limits of Fort St. John, near a liquids waste facility, which takes toxic liquids produced by the oil and gas industry and pressure pumps the untreated wastes deep underground for disposal.

Despite the spill involving toxic liquids that were being piped to the disposal well, and the disposal well itself being located close to residences that rely on wells for their drinking water, the OGC disclosed nothing publicly when the spill occurred. Six months later, it has yet to issue a press release on the spill or a single document relating to the incident. Furthermore, no documents will be released until, the OGC says, its “investigation is complete.”

One of the more curious things about the OGC’s reticence to speak about the event is that in the grand scheme of things this was a small spill. Just 20 cubic metres or roughly the equivalent of half a tanker truck’s contents was involved. Yet when first asked about the event in December, the OGC refused to divulge any details at all, and since that time has provided only three scant paragraphs worth of material. It won’t even release a copy of a report it filed with the local Ministry of Environment’s offices detailing what occurred and what it ordered the pipeline operator to do to clean up the spill and remediate the private landowner’s property.

Which quite naturally begs questions: Why the tight-lipped response? And what does such a response say about where the OGC sees its loyalties lying, as the Commission both approves oil and gas company activities and is tasked with ensuring public health and safety and protecting the environment?

A quite reasonable response to the first question is that there may be more going on than just a small spill. Or perhaps the OGC just wants to keep a lid on things given the mounting concerns residents inside and outside the region have with the amounts of water being contaminated by the gas industry in its water-and energy-intensive hydraulic fracturing or “fracking” operations.

Fracking involves the pumping of immense amounts of water deep underground at high pressure. The pumping opens cracks in the surrounding gas-bearing rock allowing the trapped gas to flow out. With more and more fracking activities underway in northeast B.C., there is increased potential for spills such as the one that occurred on August 19.

After a gas well is fracked, much of the water pumped belowground returns to the surface. Such water is by then heavily contaminated with traces of gas, heavy metals, minerals, radiological compounds and chemicals. With up to 600 Olympic swimming pools worth of water used in fracking operations at well pads in northeast B.C., the wastewater that flows back to the surface quickly amounts to a lot of toxic material. If it cannot be reused it is typically destined for “deep well disposal”, meaning that it is pumped deep below the earth’s surface where, it is hoped, it stays.

Last August’s pipeline break involved a pipeline operated by Orefyn Energy Advisors Corp. The contents of whatever was in that pipeline were destined for a disposal well operated by the same company.

In response to written questions, the OGC’s manager of communications, Hardy Friedrich, disclosed in an email that “the pipeline, operated by Orefyn” was carrying “produced water”. Produced water is water that flows back up out of a gas well after it is drilled and that may or may not be associated with fracking. In this case, Freidrich wrote, the water originated from a “sweet” gas well. Sweet gas wells, as opposed to sour gas wells, produce gas that contains very little if any hydrogen sulphide or H2S, a potentially deadly neurotoxin that has killed or seriously injured gas industry workers in British Columbia and Alberta as well as residents and workers in many jurisdictions where sour gas wells are drilled and their gas leaks or escapes.

When the pipeline broke, Friedrich wrote, “approximately 20 cubic metres of produced water spilled onto private lands and the pipeline was shut in. Permit holders are required by law to contain and eliminate spills and remediate any land or body of water affected by the spillage.”

The OGC felt the spill was serious enough that it issued a directive to Orefyn. “General Order 2011-20” was issued on September 29, six weeks or so after the pipeline spill, and was signed by Lance Ollenberger, the OGC’s deputy commissioner of operations engineering. The order directed Orefyn to clean up the site where the cattle had been killed or sickened and to repair the pipeline. Since that time, undisclosed amounts of contaminated soil have apparently been hauled away from the property.

As for the pipeline itself, Friedrich reports that it is “inactive”. But the OGC remains firm that it will not release any written materials relating to the incident, including the order.

“Unfortunately, we are not able to release any records pertaining to this order at this time. Enforcement actions are still pending, therefore, according to Section 15 of the Freedom of Information Act, information on this order cannot be released until all items have been resolved and the order is closed.”

All of which is rather curious. When a truck carrying gasoline tipped over last April on the Island Highway outside of Victoria and disgorged its contents onto the road and subsequently into the adjacent Goldstream river, provincial Ministry of Environment and Ministry of Transportation officials had no qualms about speaking to the media and about disclosing what enforcement actions they were taking and that they contemplated. It mattered not one iota that the investigation was then only in its infancy.

The big difference between the Goldstream event and that outside of Fort St. John is that the former occurred on the doorstep of the provincial capitol, disrupted traffic on a busy stretch of road and could not have failed to come to the public’s attention, while the Orefyn pipeline spill occurred in a region of the province that is larger than all but 14 of the U.S. states south of the 49th parallel, and with a sparse population of just 60,000 or so.

But this hardly justifies withholding information. Especially in a region of the province where oil and hazardous goods spills are distressingly common and where there is good reason to believe that there is a heightened risk of more pipeline breaks and more spills in the years ahead given the intense ramp-up in natural gas industry water-use now underway.

In 2009, the Ministry of Environment’s Environmental Emergencies Program released what it called an “annual report”, covering spills in various regions of the province. Due to budgetary restraints it was the first such report released in several years. There has been no such report in the two years since. In it, the ministry noted that there were a total of 587 spills in the Fort St. John region during 2008. In just the first quarter of 2009, the ministry reported, 191 spills were recorded, a 28% increase over the year before. The compilation of regional statistics ended by noting that a further “30 reports came in during [the] first 20 days of April 2009, alone.”

Of note, the 2009 spills report predates the significant upsurge in fracking operations that now characterize gas well developments in northeast B.C. Such operations have already set global gas industry records for water usage and are certain to herald an increase in the volumes of toxic wastewater that must be moved either by truck and/or pipeline to injection wells for disposal.

All of which is of note when considering the question of whose interests – that of the general public, or the oil and gas industry – are served when the regulator withholds information on a small, but nonetheless deadly spill. More than six months after the spill occurred an allegedly ongoing investigation prevents the Oil and Gas Commission from disclosing further details about what happened that day and in the days after. With regard to this incident, at least, it appears that the interests of the OGC’s industry clients take precedence over that of the public.

With more toxic waste spills a certainty in the months and years ahead, such loyalty does not inspire confidence. 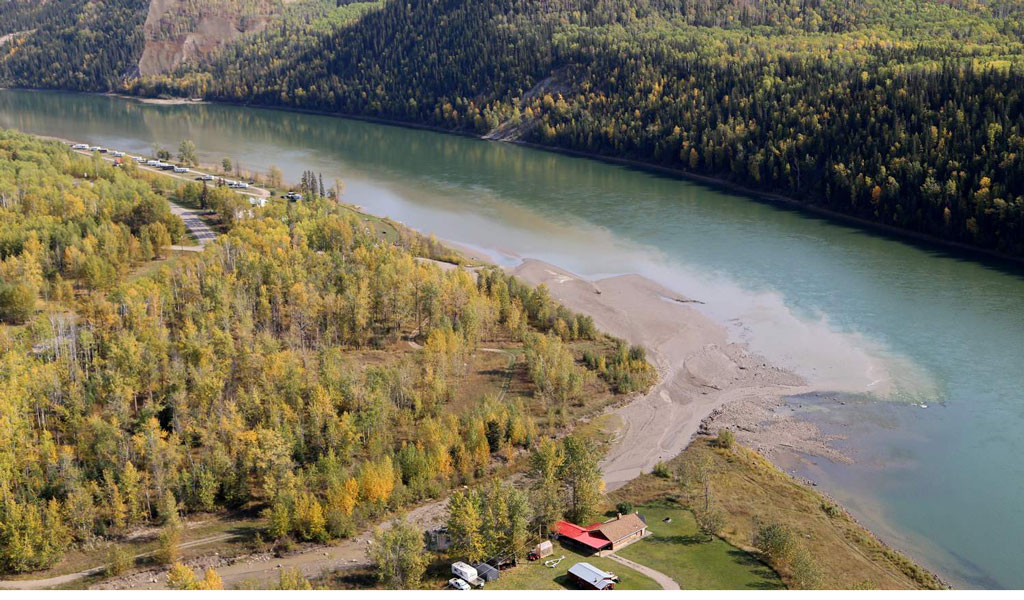 Ministry of Environment Cuts: Will That be Oil With Your Water?